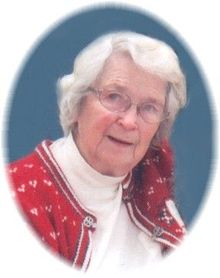 Mabel Aaser, age 91 of Osakis, formally of N. Minneapolis, passed into eternal life on May 22, 2012. She was born on March 28, 1921 to Francis and Olga (Johnson) Engstran in Alexandria. She married Rex Stanley Aaser in Carlos, Minn. on October 14, 1944. They lived six years in Alexandria, six years in Moorhead before settling in Minneapolis. After 25 years they decided to move to Osakis in 1979. Mabel was a member of the Osakis VFW Auxillary. She had numerous interests, including playing cards, reading, history and working in her flower garden. She enjoyed doing puzzles and wouldn't miss Jeopardy and Wheel of Fortune. She was the first employee at Just Like Grandma's and also had a booth at Antiques Osakis, where she made many friends.
Mabel is survived by Margaret 'Meg' (Roger) Jones of Columbia Heights, Tim (Wanda) Aaser of Ramsey, Doug Aaser Minnetonka, and Dan Aaser of Osakis; 5 grandchildren Rebecca Jones, Angela (Luke) Heikkila, Anne Fairchild, Corrie (Michael) Libby and Joe Aaser; 6 great grandchildren; sister-in-law Joy Bakken of Drayton, N.D; many nieces and nephews. Preceding her in death are her parents, her husband, Rex in April 1987, a brother Warren Engstran, two sisters, Iona Norden and Doris Fender.
Memorial services are planned for Mabel on June 16, 2012 at 2:00 at the Roy-Hetland Funeral Chapel in Osakis with Rev. Alice Tobler officiating. A gathering time begins at 1 pm. Music by Ray Engstrand and Kitty Ueke. Internment at the Evergreen Cemetery in Alexandria.
In lieu of flowers, memorials are preferred.

To order memorial trees or send flowers to the family in memory of Mabel Aaser, please visit our flower store.