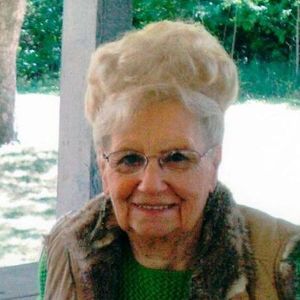 Mabel 'Babe' Elna Greiner, age 86 of Osakis, formerly of North Minneapolis, passed away early Saturday morning, August 20, 2016 at the Galeon in Osakis, MN.
On August 26, 1929 a baby girl was born to August and Mable (Hayes) Gustafson in Minneapolis, MN. She was named Mabel after her mother and she grew up in Minneapolis, graduating from North High School. Mabel married the love of her life, George Greiner on March 9, 1946. She took a job working on the assembly line at the Honeywell factory and for the MN Housing Department. She and George also owned and operated the Traveler's Paradise Bar in North Minneapolis. In addition to raising five children, Mabel later worked for the Metropolitan Medical Center and then at Abbott Northwestern Hospital. When they moved to Osakis, Mabel worked as a caregiver at a REM home and later as an aide at the Clearwater Estates in Alexandria. She also was an Avon Representative for many years.
Mabel was a life member of the Osakis VFW Auxiliary. She loved to play bingo and try her luck at pulltabs. She was always ready to meet a new friend and enjoyed socializing and traveling. Winter months would find her snuggled up with her cats reading a good book, as she was an avid reader. Mabel was a very generous, loving and caring mother, grandma and sister who will be dearly missed by her family.
She is survived by her children, Ronnie Greiner of Dassel, MN, Lee (Cheryl Rassat) Greiner of Osakis, Connie (Tom) Maxey of Nevis, MN and Brenda Nelson of Alexandria; 23 grandchildren; 41 great grandchildren; 2 great great grandchildren; step siblings, Wallace (Lori) Gustafson of Gold Canyon, AZ, Robert (Ruth) Rapke of Minneapolis, MN, LeRoy (Gloria) Rapke of Tuscon, AZ, Virginia (Charles) Edling of Princeton, MN and Sandy Thomas of Rockford, MN; many nieces and nephews.
Preceding her in death are her parents, her husband, George in 2000, a son, Danny Greiner in 1988 and two grandchildren, Tracy and Richard Edwards, a great granddaughter Felicity Jensen and son-in-law, Gary Nelson.
Funeral services for Mabel will be held on Monday, August 22, 2016 at 2:00 pm at the Osakis Lutheran Church with Rev. Rich Fitzer officiating. Interment is at the West Evergreen Cemetery in Osakis, MN with her grandchildren as pallbearers.

To order memorial trees or send flowers to the family in memory of Mabel Greiner, please visit our flower store.