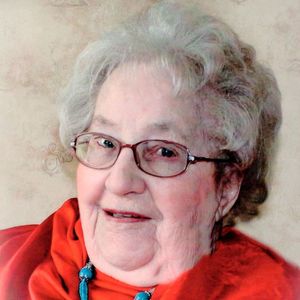 Mae Emma Whiting was born on June 5, 1928 in Rush City, MN to Alan and Hazel (Mettling) Whiting. She married Alfred Garvin on July 7, 1948 in Erdahl, MN. They moved to a dairy farm in Orange Towhship, Douglas County, MN, raised a family and farmed there until their retirement in 1985. They later moved to Alexandria into the Nelson Gables apartments, and then in 2010, Mae moved into the Knute Nelson Memorial Home.
Mae enjoyed life and was always ready to invite you in for a visit. She was a member of the Osakis VFW Auxiliary and volunteered many hours there. She enjoyed dancing, playing bingo, bowling and attending neighborhood card parties. She had a green thumb and always raised a large garden. She especially enjoyed her many varieties of flowers. Taking trips, whether just to town on errands or all the way across the country to Alaska, was a highlight for Mae as she loved to travel. She was a kind and loving mother, grandma and sister who will be dearly missed by her family and friends.
Mae passed away on Wednesday evening, October 22, 2014 at the Knute Nelson Memorial Home in Alexandria, MN at the age of 86 years.
She is survived by her children, Peggy Wegleitner of Grey Eagle, Rodney (Kathy) Garvin of Fergus Falls, Vicki (Bruce) Wunderlich of Burtrum, Ricky (Marcia) Garvin of Osakis, Fay Garvin of Redmond, OR, Bruce (Estelle) Garvin of Alexandria; 11 grandchildren; 15 great grandchildren; 3 sisters, a twin sister, Hope (Roy) Helms of Fairbanks, AK, Patricia (Gerald) Fearing of Alexandria, Sharon (John) Sullivan of Minnetonka; many nieces and nephews.
Preceding her in death are her parents, her husband, Alfred, a son, William 'Billy' Garvin and an infant son, Paul, a son-in-law, Ken Wegleitner and a brother, Glenn Whiting.
Memorial services were held on Saturday, October 25, 2014 at 2:00 pm at the Osakis Lutheran Church with Rev. Patricia Baglien officiating. The reader was Ryan Garvin. Musicians were Pat Converse, Kurt Larson and Trisha Garvin. Interment is at the West Evergreen Cemetery in Osakis with the urn bearer, Eric Pohlmann.

To order memorial trees or send flowers to the family in memory of Mae Garvin, please visit our flower store.