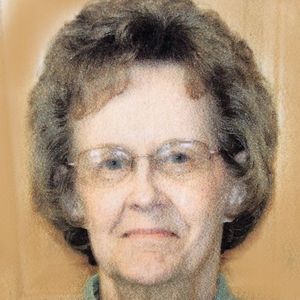 FUNERAL NOTICE FOR MARIAN BRYNJULFSON
Marian Brynjulfson, age 83 of Sauk Centre, passed away on Tuesday at her home in Sauk Centre. Funeral services will be Monday, June 26 at 2:00 pm at the Roy-Hetland Funeral Home in Osakis. Interment is at the Hillside Cemetery in Minneapolis on Tuesday, June 27. Visitation begins one hour before the service

Marian Orpha Mikkelson was born December 29, 1933 in Osakis. She was the youngest of nine children born to Mikkal (Mike) and Olga (Johnson) Mikkelson. She grew up on the family farm and graduated from Osakis High School in 1951. On April 13, 1951, Marian was united in marriage to Herloff 'Swede' Brynjulfson. They made their home in Minneapolis and had two sons, Duane and David. Marian worked as a bookkeeper, first for Sunshine Biscuit and later for Interplastic Corporation.
Swede passed away in 1990, and in 1993, Marian moved to Sauk Centre to be closer to her siblings. Marian was employed in Sauk Centre as custodian for Cabinet Components & Distribution, a job she loved and held for 13 years. Marian was loved by the employees at CCDI, where monthly she baked birthday cakes, bringing several varieties so everyone got something they liked. Marian also spoiled the employees at every holiday, bringing bags and bags of candy - of course, chocolate!
Marian had a great sense of humor, and wasn't afraid to 'share' that humor with family, the people she worked with, and all her friends. She maintained that humor all the way to her last day, and is remembered by many as 'quite a jokester'.
Marian was a devoted Minnesota Twins and Vikings fan. She and Swede especially loved watching their youngest son, David play baseball, and later enjoyed grandchildren, and (great) nieces and nephews play basketball, baseball, football, soccer and many various other sports.
Like all of her sisters, Marian was a great cook. She was a bit of a 'homebody' but loved to hostess friends and family. All were welcome at her & Swede's home, which was the place to gather nearly every week end, to share food and fun. Several generations of family recall days spent that way. When leaving for home or elsewhere, Marian made sure they had PLENTY of cookies for the trip.
She was a kind and loving mom, grandma, sister and aunt who will be dearly missed.
Marian is survived by her son and daughter-in-law, David (Deb) Brynjulfson of Brooklyn Park; daughter-in-law, Linda Brynjulfson of Anoka; 5 grandchildren, Justin Brynjulfson, Alicia Bean, Leah, Alyssa & Luke Brynjulfson; 5 great grandchildren; sister, Arlene (Ken) Sorenson of Osakis and sister-in-law, Shirley Gillan of Sauk Centre; many nieces and nephews; and one special niece and best friend, Connie Sell.
Preceding her in death are her parents, husband, Herloff in 1990; son, Duane Brynjulfson in 1996; siblings, Merlin Mikkelson, Katherine Marthaler, Harold Mikkelson, Thelma Marthaler-Grossman, Lela Sax, Raymond Mikkelson, and Charlotte Schultz.
The family would like to extend a special thanks to doctors Hilary Ufearo and Joel Dunn along with the compassionate and kind caregivers at CentraCare Health Home Care and Hospice, Riverview Manor/Accra, and the Infusion Center at CentraCare Hospital in Sauk Centre
Services for Marian will be held on Monday, June 26, at 2:00 pm at the Roy-Hetland Funeral Home Chapel in Osakis with Rev. Alan Bjorklund officiating. Interment will be at the Hillside Cemetery in Minneapolis, MN on Tuesday, June 27 at 10:30 am.
Arrangements by Roy-Hetland Funeral Home, Osakis, MN.

To order memorial trees or send flowers to the family in memory of Marian Brynjulfson, please visit our flower store.