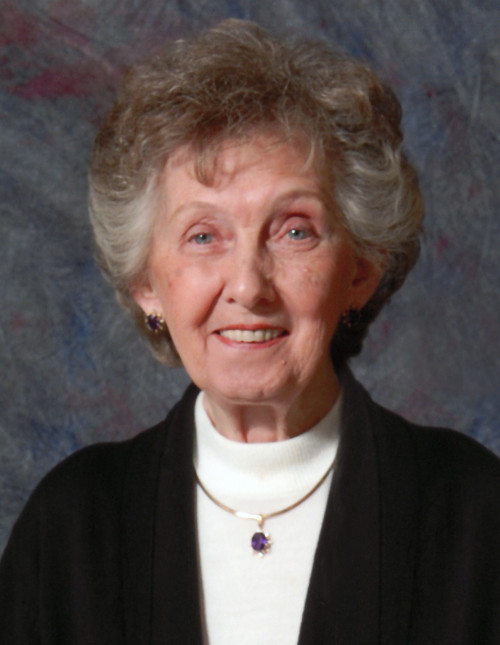 Marie Louise (Kastler) Larson was born on October 31, 1924, in Mendota, Minnesota to Rudolph and Anna (Lauer) Kastler.  She was the sixth of eight children and grew up with her siblings on the family farm in Mendota.  Marie received Holy Baptism at St. Peter Catholic Church in Mendota.  In 1937, the family moved to a small farm north of Ogilvie.  She attended school until the eighth grade, where she also helped her parents on the family farm.  Her first job away from home was in St. Paul at Continental Flour Mill.

Marie married Rodger Leslie Larson on September 15, 1952, in Worth County, Iowa.  They were the parents of five children:  Fay Lynnette, Gregory Lee, Rodger Gary, Brenda Marie and James Leslie, who was stillborn due to an automobile accident in December, 1965.

Rodger and Marie owned the local jewelry store in Osakis, where they worked side by side daily until 1989, when they closed the store and sold the building.  They were lifelong members of Osakis Lutheran Church, which was only one block from their home.  Marie was involved with the children’s Sunday nursery, cradle roll, Ladies Aid, Ruth Circle, Bible groups and quilting at the church.  She also enjoyed couples bowling, and playing cards after couples bowling, fishing off their pontoon, gardening, holding garage sales and having coffee and conversation at the local cafes with friends.  She was known for her dill pickles, which was a big request for various social functions. While Marie did like to cook and bake, her cookies, desserts and sweets recipes outweighed the other categories.  Always a priority was canning and making sure there was a variety of pickles, peaches, crab apples, pears and jellies on the shelves and corn and apple pies in the freezer until the next year’s produce was ready.  Many nights her children would lay in bed listening to the canning jars “pop” as they sealed.

The family wishes to give special thanks to the staff at the Galeon where she was well cared for the past seven years of her life.

A Memorial Service will be held 2:00 PM on Saturday, September 17, 2022, at Osakis Lutheran Church in Osakis.  Visitation will be held for one hour prior to the service at the church on Saturday.

Memorials preferred to a charity of your choice.

To order memorial trees or send flowers to the family in memory of Marie Larson, please visit our flower store.