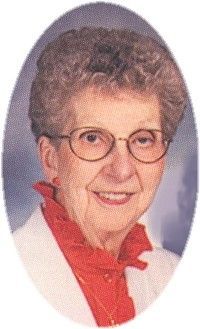 Marie M. Tenhoff, age 89 of Osakis, peaceful left this world for her heavenly home on Wednesday, October 20, 2010 from Becky's on the Lake in Osakis, MN.
Marie Margaret Knoblach was born on April 22, 1921 near Avon, MN to George and Mary (Salzer) Knoblach. She was raised near St. John's and then moved with her family to a farm near West Union before they settled south of Osakis, MN. She was married on January 6, 1948 to her soulmate, Harlan Tenhoff by Fr. James Mohm at the Immaculate Conception Catholic Church in Osakis, MN. After one year living in the country, they moved to a home on Central Av in Osakis. Marie was a devoted wife and mother. She did a laundry service for families and once her own family was older, she helped as a cook at St. Agnes Parochial school. Marie was devoted to her faith and her parish. She served in many capacities, such as singing in the church choir, belonging to the St. Elizabeth Mission Circle (serving as past president), the Daughters of Isabella and the Christian Mothers. She donated untold hours doing church decorating, cleaning and serving at funeral lunches as part of the parish women's association. Marie had also volunteered as a member of the Community Memorial Home Auxiliary.
When she did find time for herself, Marie enjoyed writing letters to family and friends, gardening and raising flowers, embroidery work and music. She had a beautiful voice and also played guitar. She was an excellent baker who made delicious pies and cookies. The joy of her life was to sit back, beaming as she watched the 'chaos' of family gatherings unfold.
Marie is survived by her devoted husband of 62 years, Harlan Tenhoff of Osakis; her children, Jim (Faye) Tenhoff of Osakis, Mary (John) Lang of Fargo, ND, Linda Amren of St. Cloud and Kathleen Clark of St, Paul; 18 grandchildren; 13 great, grandchildren; a brother, Robert Knoblach of Sauk Centre; many nieces and nephews. She is preceded in death by her parents, a son, Donald; two grandchildren, Joshua Lang and Angelina Amren; 4 brothers, Alois, Edmund, Leo and Richard Knoblach and a sister, Elizabeth Marthaler.
A Mass of Resurrection will be held for Marie on Monday, October 25, 2010 at 10:30 am at the Immaculate Conception church in Osakis with Fr. David Petron and Fr. Tom Knoblach officiating. Musicians are the church funeral choir, with special music by her daughter and granddaughter, Mary Lang and Allison Fuchs. Interment is at the Calvary Cemetery in Osakis, MN. Honorary pallbearers are her many grand and great grandchildren. Active bearers are Craig and Dana Tenhoff, Isaac Lang, Matthew Tenhoff, Mitchell and Gary Glynn.
Arrangements were by the Roy-Hetland Funeral Home in Osakis, MN.

To order memorial trees or send flowers to the family in memory of Marie Tenhoff, please visit our flower store.