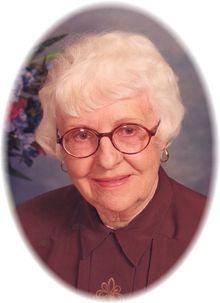 Marsaille Mathews, age 93 passed away early Saturday morning, December 31, 2011 at the Knute-Nelson Memorial Home in Alexandria, MN.
On August 13, 1918, Marsaille Irene Hanson was born to James and Gladys (Solum) Hanson in Osakis, MN. She graduated from Osakis High School in 1936 and moved that summer to Portland, OR to attend business school. She returned home again on Christmas Eve of that year and started working right away for Norman Hansen at the Osakis Novelty Company. Marsaille married Thomas E. Mathews on November 8, 1940 in Osakis. They had two children, a daughter, Kay and a son, Michael. Tom was drafted during WWII and served his country overseas in both New Guinea and the Philippines. After the war, he returned home and in 1955, the Mathew's purchased the Osakis Novelty Company, operating it until Tom's death in 1972. During these years, Marsaille continued to help do the business bookkeeping and also raise her family. After Tom's death, she took employment for three years at the Herbergers Department Store in Alexandria until she got a job locally working for the Osakis Variey Store until its closing.
Marsaille was a member of the First Presbyterian Church in Osakis and was also very active in several civic organizations. She was a charter and life member of the Osakis VFW Auxiliary, Post #7902 and served as the club president. She was a member of the Order of the Eastern Star, Lyra Chapter #166 and also belonged to a local sewing club.
Besides her many activities, Marsaille enjoyed cooking, knitting and working in her flower garden. She was an avid sports fan, not only for the MN Twins and Vikings, but also in supporting her local teams. She loved attending her grandchildren and great grandchildren's ball games. She also loved the various house cats she had over the years.
She was a kind and caring mother and grandma who will be dearly missed by her family, neighbors and many friends.
Marsaille is survived by her daughter, Kay (Richard) Vangstad of Maple Grove; daughter-in-law, Rose (Dean) Alcott of Osakis; 5 grandchildren, Pamela (Tony) Miner, Scott (Denise) Vangstad, Chad (Carla), Jason (Melissa) and Steven (Katie) Mathews; 6 great, grandchildren; 3 sisters-in-law, Gladys, Kathleen and Lillian Mathews. Preceding her in death are her parents, her husband, Thomas in 1972 and a son, Michael in 1991.
Funeral services for Marsaille will be held on Wednesday, January 4, 2012 at 11:00 am at the First Presbyterian Church in Osakis with Rev. Timothy Sutton officiating. Musicians are Ellen Bangtson and Dana Hetland. Interment is at the Lakeside Cemetery in Osakis with honorary pallbearers the members of the Osakis VFW Auxiliary and the Douglas County Chapter of the Eastern Star. Active bearers are Richard and Scott Vangstad, Chad, Jason and Steven Mathews and Tony Miner.

To order memorial trees or send flowers to the family in memory of Marsaille Mathews, please visit our flower store.