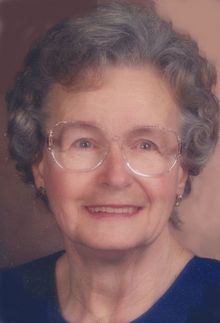 Life History for Maxine Schmidt
Maxine Anna Kraemer was born on April 4, 1926 to Theodore and Grace (Maher) Kraemer in a farm house north of Osakis. When she was four years old the family moved to a farm south of Hwy 27. Maxine attended District 33 Country School. When the family moved to a farm north of town again, she attended District 12 & 22, known as the Ketelle School. This building was later relocated and is now one of the retail shops at Just Like Grandma's in Osakis. After Maxine graduated from high school in 1944, she worked in the grocery department at the Herberger's Store in Osakis. Even working six days a week, her monthly salary was only $55.00 dollars.
When she was seventeen, Maxine met Eddie Schmidt at a dance in Miltona, MN. And although their first date had to be cancelled because of a quarantine for scarlet fever, they soon fell in love and were married on June 4, 1946 at the Immaculate Conception Church in Osakis, MN. Their first home was a farm south of Carlos, MN and in 1947 they purchased the farm they still own near Nelson, MN. In addition to raising five children, Maxine also worked as a waitress at the Farm Court Supper Club for fifteen years until it was destroyed by a fire. In 1968, Maxine went back to work for Herberger's at their Alexandria, MN store. During this time she also worked part time at the Corral Restaurant in Nelson during the winter months. After twenty additional years and three different locations, Maxine finally retired from Herberger's in 1988 at the age of 62. Maxine was an excellent seamstress and was soon hired to do alterations for the Special Events Bridal Shop in Alexandria. She sewed many wedding and bridesmaid dresses, including one for her only daughter, Paulette. She would do fittings at the shop every Wednesday and Saturday and then go home to sew the alterations, often working long into the early morning hours. Maxine didn't mind though, as she always claimed sewing was a way for her to relax.
Besides her talent for sewing, Maxine also enjoyed loving and spoiling her children and grandchildren. She loved to shop for them and since Christmas was her favorite holiday, she would begin buying Christmas gifts for her family as early as January. She also loved gardening, music, dancing and socializing with her many neighbors, friends and family. Never one to raise her voice, Maxine was always a very kind and gentle person, always ready to share a warm smile with anyone she met. She will be dearly missed by all who knew her. Blessed be her memory.
Maxine is survived by her husband of over 66 years, Eddie Schmidt of Osakis; her children, Gary (Jeanie) Schmidt of Fredricks, SD, John (Marilyn) Schmidt of Alexandria, Mike (Mary) Schmidt of Nelson, Paulette (Richard) Dunn and Paul (Cheryl) Schmidt, all of Osakis; 13 grandchildren, Delrene Tschida, Rebecca Ellman, Peter, James, Jason, Joshua, Matthew and Mark Schmidt, Megan Prescott, Robbie & Rory Dunn, Jenna Helgerson and Tana Ziesmer; 13 great grandchildren, Zoei, Emma, Addy, Marilee, Grace, Hunter, Mya Nora, Bronson, Violet, Jackson, Tyla and Jakoby; a brother, Ronald (Pauline) Kraemer of Osakis and two sisters, Marvel (Donnie) Sprague of Ham Lake, Carolyn (Bob) Wieland of Alexandria; many nieces and nephews.
She is preceded in death by her parents, Theodore and Grace Kraemer.
A Mass of Ressurrection will be held for Maxine on Wed., January 9, 2013 at 11:00 am at the Immaculate Conception Church in Osakis with Fr. Andrew Marthaler officiating. Interment is at the Calvary Cemetery in Osakis with active honorary and pallbearers being her grandchildren.

To order memorial trees or send flowers to the family in memory of Maxine Schmidt, please visit our flower store.