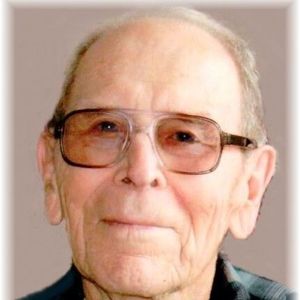 Life History for Melvin Resley
Melvin Resley, 95 years young, passed away on Saturday evening, August 6, 2016 at the Bridgewell Memory Care facility at Galeon in Osakis, MN.
Funeral services for Melvin will be on Friday, August 12, 2016 at 11:00 am at the Roy-Hetland Funeral Home in Osakis. A visitation will begin one hour before the service. Burial is at the MN Veterans Cemetery in Little Falls, MN at 2 pm on Friday, August 12, 2016 with full military honors.
Melvin Ross Resley was born on April 20, 1921 in Osakis, MN to Clarence D. and Etha Jane (LaMonte) Resley. He grew up in Osakis and as a young man went to work with the Civilian Conservation Corp. When WWII broke out, Melvin enlisted to serve his country in the US Army. He received the Purple Heart, the EAME Service ribbon and three Bronze Service Stars during his time stationed in northern France and central Europe. He was honorably discharged in June of 1945. He returned home and bought a farm north of Osakis. On October 14, 1947 Melvin married Shirley Randall at the Methodist Church in Long Prairie, MN. They farmed and raised three children. After retiring in 1983, the Resleys moved into the Manor Apartments in Osakis.
Melvin was a lifetime member of the Disabled American Veterans.
Besides his love for family, Melvin treasured his time outdoors and loved to take long walks and enjoy nature. He also enjoyed bicycling and playing cards with neighbors and friends. He was a loving and devoted husband, father, grandpa and brother who will be dearly missed.
He is survived by his wife of 67 years, Shirley Resley of Osakis; children, Daniel (Tuyet) Resley of Hemet, CA, LuAnn (Dale) Beckman of Alexandria, MN and Randy (Gretchen) Resley of Osakis, MN; 10 grandchildren; 10 great grandchildren; a sister, Lela Ballard of Alexandria, MN.
Preceding him in death are his parents.
Arrangements were handled by the Roy-Hetland Funeral Home, Osakis, MN.

To order memorial trees or send flowers to the family in memory of Melvin Resley, please visit our flower store.