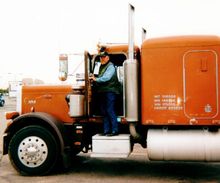 Life History for Michael 'Mike' Robinson
Michael Robinson, age 65 of Osakis passed away on his birthday, August 4, 2014 at the Douglas County Hospital in Alexandria, MN. On August 4, 1949 a baby boy was born in Alexandria, MN to Marvin and Elvira (Anderson) Robinson. They named him Michael Kent and he was one of four boys and three girls in their family. Michael attended Osakis High School and graduated with the class of 1967. He furthered his education at Alexandria Technical School in the Diesel Mechanics program. He also served as a member of the National Guards. Since his father drove trucks for a living, it wasn't long before Michael had an interest and then a truck of his own. He drove with his father for a few years before starting his own trucking business. He married Sheryl on September 21, 1985 in Duluth, MN. Through the 49 years of driving, Mike worked for various companies in addition to taking jobs on his own. Over his career, he drove for H. Boyd Nelson, Carpole's of Garfield, Mendelson-Hensley, Kohorst, Todd Co Sand & Gravel and Mark Lee Excavation, Kiley's, and Schurman Farms and Grain. He was very fussy about his equipment and always kept his truck washed and polished. He took pride in his work as both a mechanic and a trucker. In his off time he liked to tinker in his garage on vehicles for himself, friends and family. But a nice day out fishing was also a past time he enjoyed. Mike liked to joke about his mechanical abilities, "The difficult I do right away, the impossible just takes a little longer." He was a kind-hearted husband, father, grandpa and brother who will be dearly missed by those who knew and loved him. Mike was a life member of the Little Sauk American Legion. He is survived by his wife of 28 years, Sheryl Robinson of Osakis; children, Chane (Donna Vedral) Robinson of Sauk Centre and, Kim (Mike) Wallace of Osakis; Shelly Robinson of Osakis; and Mark Gonser of Marcell, MN; 9 grandchildren; a sister, Sue Stoetzel of Osakis and a brother, Thad Robinson, also of Osakis; many nieces and nephews. Preceding him in death are his parents, sisters, Gail Fiskness and Alaine Olson and brothers, Jon and Gary Robinson. Funeral services will be held on Thursday, August 7, 2014 at 2:00 pm at the First Presbyterian Church in Osakis with Rev. Tim Sutton officiating. Musicians are organist, Ellen Bangtson and soloist, Dana Hetland. Honorary bearers are Chad Behing, Mike Urban, Bob Maxwell, Ron Walsh, Owen Michaelson and Charlie Barrett. Active bearers are Dacotah, Rory and Shawn Robinson, Chris and Damon Stoetzel, Troy and Lance Barrett, Travis Euerle.
Arrangements by the Roy-Hetland Funeral Home in Osakis, MN.

To order memorial trees or send flowers to the family in memory of Michael Robinson, please visit our flower store.