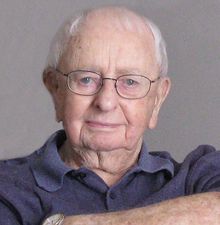 Neil Gillis was born on July 19, 1916 in Tracy, Minnesota. He was one of 11 children. He graduated from the University of Minnesota with a Pharmacy degree in March 1943. In 1941 he married Wanda Brown. After graduating from college Neil served in the United States Navy as a Pharmacist Mate from 1943-1945. Neil and Wanda moved to Osakis in 1949 where he owned and operated Gillis Rexall Drugs until he sold it in 1985. He maintained his Pharmacy license and continued to work as a fill in pharmacist until he turned 90.
Neil and Wanda were married 46 years until her death in 1987. He is survived by their two children William and James, 6 grandchildren, 8 great-grandchildren, his beloved Lorraine Thompson, and countless friends.
Neil was an active community leader serving on the Osakis Public School Board, for 9 years, 15 years on the Osakis Nursing Home Board, and 3 years on the Osakis Presbyterian Church Board. He began serving on the Douglas County Hospital Board when he was 85. He was chairman of the hospital board at age 94. Neil was also a member of the Rotary Club, Chamber of Commerce and the Masonic Lodge.
Neil was an avid bowler, card player, storyteller, golfer, and fisherman. He loved music; all sports (especially the Golden Gophers, and the Minnesota Twins). He bought an iPad when he was 95 and was emailing to the West Coast and grandchildren in Minnesota and Istanbul, Turkey up until 2 days before he died. He mentioned several times he regretted waiting so long to use technology. He enjoyed politics and watched Sunday news shows. He watched them right up until the Sunday before he died and discussed them with visitors.
He loved brownies, chocolate covered peanuts, Kemps ice cream and new cars (especially Chryslers).

To order memorial trees or send flowers to the family in memory of Neil Gillis, please visit our flower store.