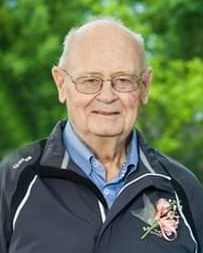 Newman Everett Olson Jr, 84, died peacefully at the Galeon nursing home in Osakis on December 18, 2021, with his wife of 63 years at his side.

Son of Newman Olson and Katherine Evenson Olson, Newman was born in Duluth on April 3, 1937. In 1942 his family moved to Osakis where he attended school and graduated in 1955.  He then attended Hamline University and received his BA degree in 1959.

On August 19, 1958, he married Sonya Evans, a native of Ulysses Kansas who moved to Osakis during their high school years.

Newman became President of the First National Bank of Osakis in 1972 having joined the staff of the bank in 1959. He served as President until 1999 and as CEO until 2019. In 2010, Newman celebrated 50 years of service and was inducted into the Minnesota Bankers Association Pioneer Club in honor of his lifelong contributions given to Minnesota’s banking community. Newman remained a member of the FNBO Board until the time of his death.

“Tuke” as he was commonly known to the entire community in his younger days, was active in all community affairs throughout his life. In 1967 he was elected to the local school board, where he served for many years, including time as Board Chairman.  He was an Elk, a Mason and a member of the Osman Temple of the Shrine for over 50 years.  He spent time serving on the Douglas County Hospital and Community Memorial Home Boards. He also served on both the Presbyterian Church Board of Trustees and the Session for many years. He was a past president of the Osakis Lions and an active Republican. He was also one of the early promoters of the Osakis Country Club.

An enthusiastic football fan, Newman held U of M Gopher season tickets for more than 50 years. During football season, an important step in planning any holiday or family celebration was to ensure all family activities happened around game times.

Newman also loved to travel.  He took his family on a two or three week vacation every summer while his children were growing up.  Many lasting memories were made during those annual trips in the travel trailer.  Singing around a campfire with “hippies” in Teton National Park; visiting presidential libraries, family gravesites, and Chicago museums in the Midwest; dealing with treacherous mountainous roads and long travel days listening to comedy routines and The Sound of Music on a portable tape player; and experiencing extreme weather conditions including a summer snowstorm in Yellowstone and 109 degrees in the shade in British Columbia are among the memories we shared during those special times. After the children were grown, Newman and Sonya traveled to many special places around the world.

Newman was preceded in death by his parents, Newman and Katherine (Evenson) Olson Sr. and his brother Steve Olson, Sr.

A visitation will take place on Monday, December 27, 2021, from 4-7 PM at the Roy-Hetland Funeral Home and one hour prior to the funeral service on Tuesday at the church.

A funeral service will be held on Tuesday, December 28, 2021, at 11 AM at the First Presbyterian Church in Osakis, MN with the Reverend Lois Burkart officiating.

Masks are recommended but not required.

Interment will be in Gordon Pleasant Hill Cemetery.

If so desired, memorials may be directed to Trustees of the Hamline University of Minnesota - Claribelle Olson Scholarship Fund or West Central Initiative, or to the donor’s choice.

We will always carry your memory in our hearts.

To order memorial trees or send flowers to the family in memory of Newman Olson Jr., please visit our flower store.
Open