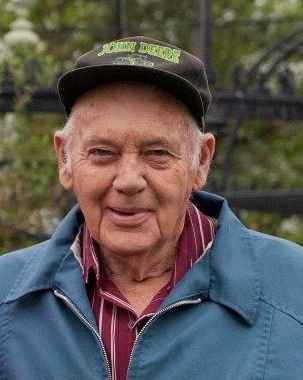 Norman Reinbold, age 87 of rural Long Prairie passed away at his home on Thursday evening, December 6, 2018 with his family by his side.

On October 28, 1931 a son was born to Joseph and Amanda (Voight) Reinbold in Reynolds Township, Todd Co., MN and they named him Norman Leslie.  He grew up on the family farm and attended country school.  He loved farming and life in the country and continued to farm his entire adult life.  On December 19, 1951 Norman was married to Letitia Jane Robinson at the First Baptist Church in Long Prairie.  They lived and farmed in Todd County west of Long Prairie on County 36.  Norman also worked for the Reynolds Creamery for many years hauling canned milk.  Norman loved working with his farm animals, especially the cows and always had a good farm dog close on his heels.  He loved watching his children and grandchildren grow.  He also attended their sporting events and enjoyed playing card games when they were over for a visit. Norman also enjoyed listening to music at any event he attended, including fairs, festivals, and threshing bees. He always had the radio tuned to his favorite country stations.

Norman loved his family and was so appreciative of their help in allowing him to spend his final days on the farm, especially the care of Chuck, Connie, and Carolyn which made this possible.

Funeral services for Norman will take place on Thursday, December 13, 2018 at 11:00 am at the First Baptist Church in Long Prairie.  Interment is at the Evergreen Cemetery in Long Prairie with his grandchildren as honorary bearers.  Active bearers are Reed Reinbold, Matt Reinbold, Anthony Reinbold, Adam Hansen, Michael Latzke and Jeffrey Mattson.  Visitation hours are from 4 – 7 pm on Wednesday evening at the Roy-Hetland Funeral Home in Osakis, MN and one hour before the service at the church on Thursday.  Arrangements by the Roy-Hetland Funeral Home in Osakis, MN www.royhetland.com

To order memorial trees or send flowers to the family in memory of Norman Reinbold, please visit our flower store.