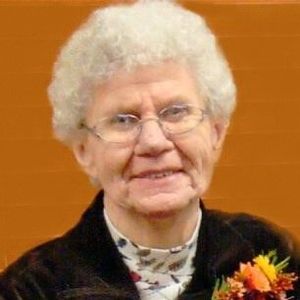 LIFE HISTORY for OLGA SCHMIDT
Olga A. Schmidt (Kreft), age 89 of Osakis passed away Sunday, June 19, 2016 at the Community Memorial Home in Osakis, MN where she had been a resident.
She is survived by her children, Jim (Sally) Schmidt of Sauk Centre, Cindy (Craig) Soltis of St. Cloud, Kathy (Jeff) Waltzing of Crystal, Brenda (Art, Jr.) Dougherty of St. James; daughter-in-law, Cherry Schmidt of Sauk Centre; ten granddaughters and ten great grandchildren. She was preceded in death by her parents, her husband, Delfin Schmidt; an infant daughter, Linda Schmidt, a son, Darwin Schmidt, a grandson, Michael Schmidt; two brothers, Paul Kreft and Fred Jahnke and two sisters, Meta Messerli and Sarah Wittenberg.
Olga was born on October 14, 1926 to Herman and Alvina (Pochrandt) Kreft at the family farm in rural Gibbon, MN. She attended school in Gibbon and then moved to New Ulm, MN when she worked at the New Ulm Hospital. Olga married Delfin Schmidt on October 12, 1947 in Gibbon, MN. They farmed in Springfield and Hector, MN before moving to Osakis in 1953. They continued farming until 1960. Olga was busy as a full time wife and mother. When they moved off of the farm and in to Osakis, Olga enjoyed planting her garden each year. She provided cleaning services for various businesses in Osakis, such as the Osakis Silo Co., the Sportsman's CafAC., Gillis Drug and the US Post Office and also cleaned private homes during these years as well. Olga was a member of Osakis Lutheran Church and belonged to the Ladies Aide.
Some of her favorite hobbies included planting and canning vegetables from her garden and making beautiful embroidery work as gifts for her family and friends. She like to play cards, especially Pinochle and Buck Euchre. Olga was a kind and loving mother and grandma who will be dearly missed by her family and friends.
Funeral services for Olga were held on Wednesday, June 22, 2016 at 1:00 pm at the Osakis Lutheran Church with Rev. Rich Fitzer officiating. Organist was Pat Converse. Interment is at the Oak Hill Cemetery in Melrose, MN with casket bearers being her ten granddaughters, Kristi, Kerry, Robyn, Julie, Jodi, Linda, Tiffany, Regina, Jamie and Hope.
Arrangements by the Roy-Hetland Funeral Home in Osakis, MN.

To order memorial trees or send flowers to the family in memory of Olga Schmidt, please visit our flower store.