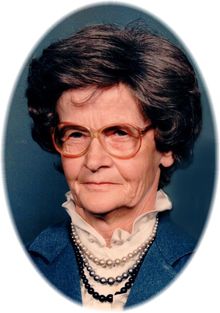 LIFE HISTORY FOR ORPHA SIBELL
Orpha Sibell, age 85, lifetime resident of Osakis entered her new life on Wednesday, October 29, 2014 from her home at Becky's on the Lake, Osakis, MN.
On October 2, 1929 Fred and Olive (Grover) Edenloff, Sr. had a baby girl in Osakis, MN. They named her Orpha Florence Edenloff. She grew up in Osakis and nineteen years later Orpha married her sweetheart, Gail Sibell on October 10, 1948. From a young age, Orpha learned to be a hard worker and she took on many demanding jobs throughout her lifetime. She started out working by candling eggs for the local grocery store and also setting bowling pins at the bowling alley back before automation made that tedious job obsolete. After the Sibell's married, they opened up a bait shop in Osakis and Orpha worked tirelessly for over thirty years running the business. Not only did they operate and supply a retail bait store, but they also maintained over 30 area ponds which provided enough bait to sell both locally and commercially. During the long winter months the Sibell's also set up, maintained and rented out ice fishing houses. In 1981, after their retirement from the bait business, they built a home in Leslie Township, Todd Co. Orpha then took on various cleaning jobs, with such accounts as the Osakis Post Office, the Gordon Harford Insurance office, the Community Memorial Home and other private individuals. When her son purchased and operated the Head of the Lakes Resort for seven years from 1993 until 2000, Orpha also spent many hours helping out there. She was a long time member of the Osakis Lutheran Church.
Some of Orpha's favorite past times included being out on the lake fishing, whether it was in the summer or the winter. She also did a lot of canning each fall, either from the large garden Gail planted each year or from the game they hunted every fall. Orpha enjoyed meeting new people, hearing their stories and then sharing some of her own. She was happy to be outdoors regardless of the temperature and was a wonderful example of a talented, dedicated, and hard-working woman. She was a kind and loving mother, grandma and sister who will be fondly remembered by all who knew her.
She is survived by her sons, Gerald (Linda) Sibell of Hibbing, Darwin Sibell of Osakis; two grandchildren, Mickey and Christopher Sibell; two brothers, Marvin (Jean) Edenloff of Minneapolis and David (Sue) Edenloff of Circle Pines; many nieces and nephews.
Preceding her in death are her parents, her husband, Gail in 2011; three brothers, Lester, Charles and Fred, Jr.; a sister, Luella Edenloff.
Funeral services for Orpha were held on Friday, October 31, 2014 at 11:00 am at the Roy-Hetland Funeral Home in Osakis with Rev. Rich Fitzer officiating. Interment was at the Pleasant Mound Cemetery near Clotho, MN with honorary bearers being Glen and Alvin Sibell, Marvin and David Edenloff.
Arrangements by the Roy-Hetland Funeral Home in Osakis, MN.

To order memorial trees or send flowers to the family in memory of Orpha Sibell, please visit our flower store.