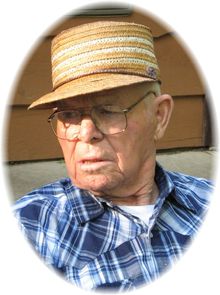 Life History for Orville Martin
Orville Martin, age 95 of Osakis passed into his new life on Tuesday, September 17, 2013 at the Douglas County Hospital in Alexandria, MN.
Orville was born on March 25, 1918 to Wesley and Tillie (Homberg) Martin. He grew up in a family of 16 children on a farm near Sauk Centre near Sauk Lake. He attended country school and then worked on the family farm. On September 11, 1942 he married his sweetheart, Lillian Johnson at the Osakis Lutheran Church. Three days later he returned to his position as ordinance mechanic for the U.S. Army. After two years serving in Newfoundland, BC he returned home and began working in Minneapolis, MN. That spring they rented a farm from George Herberger northwest of Clotho, MN and farmed there for a year and a half. In 1946 the Martin's bought the farm they would live on and work for the next 65 years. In addition to farming, Orville also did work with four of his brothers in Foley at the Martin Bros. Terrazo Co., and also as a loss verifier for the government on flood claims. His next business was fixing and selling Cub Cadet lawn mowers. They raised three sons.
Some of Orville's hobbies and interests include fishing, hunting, gardening, working on Cub Cadets and having coffee and conversation with his buddies.
He is survived by his wife of 71 years, Lillian Martin of Osakis; his sons, David (Sharon) Martin of Bozeman, MT, Dean (Doris) Martin of Charleston, SC and Darrell (Karen) Martin of Osakis; 9 grandchildren; 20 great grandchildren and 4 great, great grandchildren; seven brothers and sisters; many nieces and nephews.
He is preceded in death by his parents and nine siblings.
Memorial services will be held for Orville on Friday, September 20 at 2:00 pm at the Leslie Community Church in rural Osakis with Rev. James Brown officiating. Burial was at the Evergreen Cemetery in Long Prairie, MN.
Arrangements are with the Roy-Hetland Funeral Home in Osakis, MN.

To order memorial trees or send flowers to the family in memory of Orville Martin, please visit our flower store.