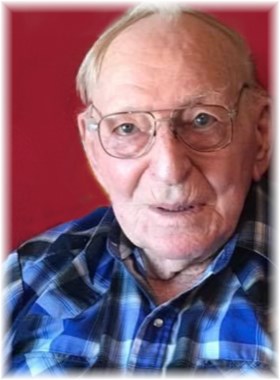 Orville Quistorff of Osakis left his earthly life on Friday evening, Oct. 30, 2020 from the Galeon in Osakis, MN at the age of 91 years.

Orville was born in Kandota Township, Todd County on June 8, 1929 to parents, Emil and Clara (Glockzin) Quistorff and was one of eleven children born to this union.  Since several siblings (three sisters and two brother) died as infants, Orville grew up with three brothers and two sisters.  Orville grew up helping on the family farm, learning early the values of hard work and responsibility.  He attended country school through the eigth grade and then went to work at the Cattle Yard in South St. Paul.  After he met a dark-haired beauty named Thelma in Sauk Centre, it wasn’t long before he proposed and they were married on May 5, 1951.  They began a lifetime of dairy and crop farming, renting several places in Todd County before purchasing a farm in rural Osakis.  To earn some extra money, Orville took a job doing the night shift at Harts Press Printing in Long Prairie and worked there for many years.  Over the years he also had part time jobs at both the Little Sauk and Osakis Creameries and Central Bi-Products in Long Prairie.  In his retirement, Orv also helped out in Osakis at his son’s locker plant.  Orville was a member of the Sauk Valley Lutheran Church in rural Osakis and served for a time on the Dist. #2306 School Board.

Never one to sit still, Orville spent his free time out working in his woodshop, building rocking horses and yard ornaments, or tending in his large vegetable garden.  He loved yearly fishing trips with the family to Effie, MN.  Orv was raised riding and working with many teams of draft horses, and enjoyed horses all of his life.  He also had a soft spot for dogs, especially Collies named Shep. When he retired and moved into town, Orville gave some of the beautiful rolling pastures and farmland he owned to the Dept. of Natural Resources and enjoyed knowing that many others would be able to walk through this new nature preserve named after his family.  You could count on Orville to enjoy a good joke and then be ready to tell one of his own.  He looked forward to the large family gatherings held for birthdays and holidays, as well as time just socializing with his buddies over a beer or two at the local Municipal.  He was a hard-working family man whose legacy will live on in the hearts of those he leaves behind.

He will be welcomed home by his parents, his wife, Thelma who died in 2008, a son, David, a grandson, Samuel Quistorff and a great granddaughter, Sabrina Trebus; his siblings, Mabel (George)Trierweiler, Marcella (Walter) Gettel, Albert (Bernice), Arnold (Lois) and John (Audrey) Quistorff.

A private family funeral service will be held, but the public is invited to a visitation for Orville on Tuesday, Nov. 3, from 5 – 7 pm at the Roy-Hetland Funeral Home in Osakis and to the Commital Service to be held on Wed. Nov 4 at the Silver Creek Cemetery in West Union Township at 11:30 am.  Facial coverings are required.  Casketbearers will be his six son-in-laws.  Honorary bearers are David Sauer, Mike Quistorff, Jim Johnson, Kay Quistorff, John Terfehr, Danny Field, Julie Martin, Chuck Hector, Sharon Walter, Donald Quistorff and Caroline Porttiin.

Condolences, memories may be left on the obituary Tribute page at www.royhetland.com.  Arrangements by the Roy-Hetland Funeral Home in Osakis, MN.

To order memorial trees or send flowers to the family in memory of Orville Quistorff, please visit our flower store.