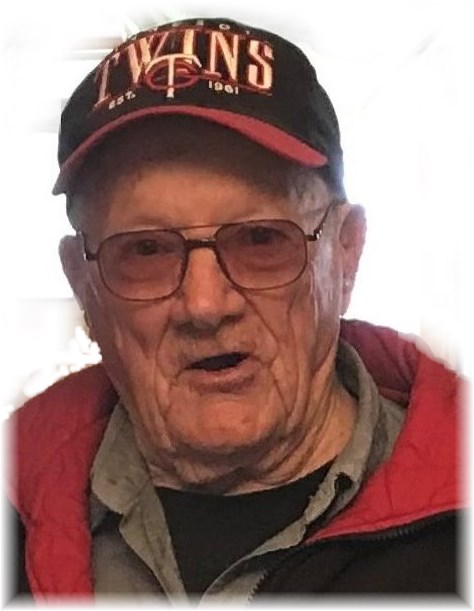 Orville Royer, age 90 of Osakis passed away unexpectedly on Sunday, April 5, 2020 at his home in Osakis, MN.

On May 6, 1929 a son was born to Millard and Lena (McGuire) Royer in Redwood County, MN.  He attended country school and as a young man learned the meaning of hard work when he took his first job at the Eagle Roller Elevator.  When the Korean War broke out, Orville joined the National Guard and was mobilized on January 6, 1950 to train at Camp Rucker in Alabama.  By August of that year he was sent to Korea and would spend thirteen months there on the front lines in service to his country.  In September of 1951 he was honorably discharged and received the Combat Infantry Badge and the Good Conduct Medal.  After returning to Minnesota, Orville attended school at the Gale Institute in Minneapolis to become a Depot agent.  This included long classes in learning to do telegraphy.  After receiving his certificate, he was soon hired by the Chicago-North Western railroad.  He worked for them for seven years and when passenger train service declined, he then took a new job working for Kraft Foods in 1959.  Orville retired from there after 27 years of dedicated service.  Orville married Darla Bengston in 1954 and three children were born, Radburn in 1955, Denise in 1956 and Ross in 1958.  Orville later married Karen Dahl and they had two daughters, Cora who was born in 1972 and six years later, Ida joined the family.  Karen passed away November 14, 2002 and it was after her death the following June that Orville moved to a home in Osakis, MN near the lake where he could pursue his love for fishing.

Orville was a member of the ELCA Lutheran Church and attended the Osakis Lutheran Church.  He was a past member of the Lions Club and belonged to a New Ulm dance club called the Twist and Twirl.  Besides his love of fishing and dancing, some of Orville’s other hobbies included deer hunting, gardening, playing cards and sporting events.

A Celebration of Orville’s life will be held at a later date.  Updated service times and online condolences and memories may be left on his Tribute Wall under his obituary at www.royhetland.com.  Arrangements handled by the Roy-Hetland Funeral Home in Osakis, MN.

To order memorial trees or send flowers to the family in memory of Orville Royer, please visit our flower store.

Services are to be announced