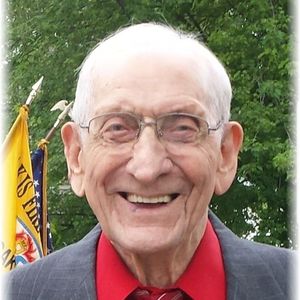 LIFE HISTORY FOR ORVILLE VANGSTAD
Orville Vangstad, age 96 of Osakis passed into his new life early Friday morning, June 2, 2017 at the Douglas County Hospital. He has been a resident at Galeon Senior Living in Osakis, MN for the past several years.
On February 27, 1921 Orville Joel Vangstad was one of fourteen children born to Ole and Julia (Halvorson) Vangstad on a farm in Gordon Township, Todd Co., MN. He grew up on the farm east of Osakis and went to a small country school where the Vangstad children dominated the classroom. He learned early on how to work hard, be kind to others and do it all with a smile. These skills would serve him well throughout his long life. On October 2, 1946 Orville married Lorraine Maus in Osakis. They lived and worked in Kerkhovan, MN for a year before returning to Alexandria, where Orv was hired by Webb Oil Company. When they moved back to Osakis, Orv worked for Pollard's Mill and Elevator. Never afraid of hard work, Orv also worked part time for Benson Oil. During these years, Orv also managed to help raise and support his family of eight children as well as volunteer as a member of the Osakis Fire Department, serving the City of Osakis for over 27 years. He belonged to the Osakis Ambulance squad for twelve of those years. In 1965, the Osakis Public Schools hired Orville to be part of the janitorial team. Not only was this a perfect fit for someone used to putting in long hours, but the students and faculty enjoyed his jovial and fun-loving spirit. He retired in 1987, and over those twenty-two years made a positive impact on so many students with his funny antics, a smile, a whistle, or word of encouragement. During the summer months, Orville worked as a house painter with partner, Harlan Tenhoff. After Lorraine's death in 1990, Orville found companionship with his friend, Marie Merten, and they married on October 3, 1992 in Sauk Centre. They were members of St. Paul's Catholic Church and Orv enjoyed singing in the church choir and helping as a greeter for the weekly Masses. He also volunteered as part of the Catholic Charities Foster Grandparent program. Marie passed away in 2006.
In addition to his love for people, Orv had a knack for getting to know and make friends with everyone he met. He could strike up a conversation with people of any age or background. He loved music and was always humming, singing or playing his harmonica. Dancing was another passion, as he was a "natural" on the dance floor. He loved to travel, not only to see new places but to meet people. Orv also liked gardening, bowling, doing woodworking projects and playing cards. Fishing (both in the summer and winter) was another past time he enjoyed. He was a wonderful and loving father, grandpa and brother who will be dearly missed by all who knew him.
Orville will live on in the hearts of his children, Diane (Dick) Trisko of Rochester, Pat Abbott of Alexandria, Bob (Karen) Vangstad of Osakis, Terry (Sandy) Vangstad of Fargo, Deb (Jeff) Callaghan of Alexandria, Lori (Doug) Dewey of Eden Prairie, Becky (Derek) Maffei of Buffalo; son-in-law, Joe Ruh of Big Lake; 20 grandchildren; 21 great grandchildren; 2 sisters, Sylvia Johnson of Osakis and Gloria Didier of Pine City; many nieces and nephews.
He is preceded in death by his wives, Lorraine and Marie; a daughter, Susan Ruh; grandsons, Chad Vangstad and Patrick Callaghan; granddaughter, Melissa Aune; son-in-law, Bob Abbott; siblings, Melford, John, Joe, Lloyd, Ole, Elroy, Orpha Vangstad, Helen Bellanger, Muriel Grams, Marian Gensicke and Shirley Fischer.
Funeral services for Orville will be held on Tuesday, June 6 at 11:00 am at the Immaculate Conception Church with Fr. Dave Petron officiating. Interment is at the Nelson Cemetery in Nelson, MN. Honorary bearers are Harlan Tenhoff and members past and present of the Osakis Fire Department and Osakis Ambulance. Active pallbearers are Beth Hanson, Lisa Weiskopf, Dalton & Alex Dewey, Jay Trisko, Austin and Marco Maffei, Jason & Eric Vangstad.
Arrangements by Roy-Hetland Funeral Home, Osakis, MN.

To order memorial trees or send flowers to the family in memory of Orville Vangstad, please visit our flower store.