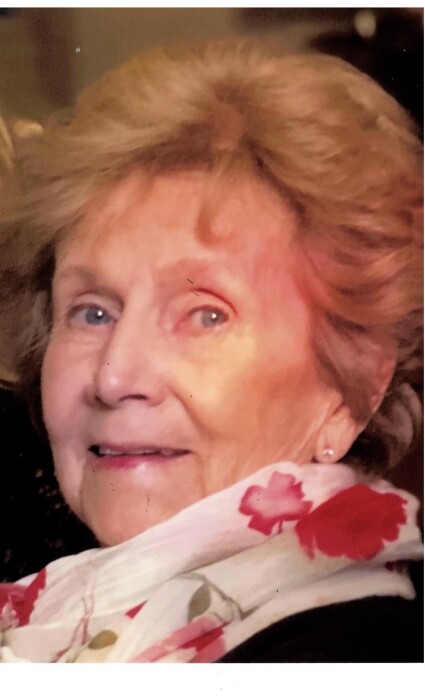 Pauline Doris (Cook) Kraemer passed away peacefully at home surrounded by her loving family on September 29, 2020. Pauline was the beloved wife of Ronald J. Kraemer with whom she shared 63 years of marriage.

Pauline was born in Lowell, Massachusetts on November 28, 1933, the firstborn of Jean (Morin) and Charles Cook. She attended St. Michael Elementary School and graduated from Lowell High School, class of 1953. She attended beauty school and worked as a hairdresser for a short time, and then appropriately, at Grace Shoe Company of Lowell. One evening at the famous Commodore Ballroom in Lowell, she met “Ronnie,” a young military man stationed at Fort Devens. He asked to drive her home, but she only said yes if he would give her friends a ride home, too. He did, and they continued their relationship even after he was stationed in Hawaii for two years. During that time, they wrote letters back and forth until one day, Ronnie showed up after hitchhiking across the United States with a ring in his pocket. She said yes.

Pauline and Ron were married in 1957 and made their home on their dairy farm in Osakis, MN. For the next six decades, Pauline went from city girl to proudly helping run the farm as they raised their four children. As they grew, Pauline began working at St. Agnes Parochial School in the 1970’s, impacting the lives of young children. She proudly held the position of Title I Reading teacher for over thirty years.  In the 1980’s she started another job during her summer months, the hostess of Just Like Grandma’s in Osakis. Here, Pauline was like a mother to the young staff, a server when it got busy, and a friendly face when you entered the door. No matter how crowded and busy it was, she would always manage to find an open table for her guests. It was a position she looked forward to every year; seeing old friends and making new ones.

Always a lady, Pauline touched the lives of many through her kind and gentle ways, often giving quietly of herself without wanted attention or recognition. She was loved by all who had the pleasure of knowing her. Most important to Pauline was her family. Being with her children and grandchildren filled her heart and gave her endless joy. Also giving her joy was her summer flowers and her riding lawnmower. She was meticulous with the yard and put many miles on the John Deere keeping the lawn manicured. She will be fondly remembered by many as “Mama,” a name affectionately given to her by Ron. She will also be remembered for her love of shopping and dressing well, a skill she perfected over the years at Herbergers.

Pauline is survived by and will be deeply missed by her beloved husband Ron and their four children and their spouses, Brenda Wild and her husband Paul of Alexandria, MN, Theodore and his wife, Elizabeth Kraemer of Osakis, MN, Beth Ann Seibert and her husband Thomas of Minnetrista, MN and Andrea MacMullin and her husband John of Tewksbury, MA. She was the beloved grandmother to her four grandchildren, Justin and Allison Kraemer and Jack and Madeline MacMullin. She was the cherished sister to Irene Coope and her late husband Kenny of Methuen, MA and Richard Cook and his wife Priscilla of Salem, NH. She was also the loving sister-in-law of Marvel Sprague of Ham Lake, MN and Carolyn (Bob) Weiland of Alexandria, MN, brother-in- law of Edward Schmidt of Osakis, MN, and aunt to many special nieces and nephews. She is preceded in death by her parents.

The family would like to thank all of the tremendous caregivers from Alternative Senior Care and Knute Nelson Hospice.

A Mass of Resurrection will be held on Saturday, Oct. 3, 2020 at Immaculate Conception Catholic Church in Osakis, MN with Fr. David Petron officiating.  Musician is Sara Severson and readers are her son, Ted Kraemer and granddaughter, Madeline MacMullin.  Interment is at the Calvary Cemetery in Osakis, MN with pallbearers, Paul Wild, John MacMullin, Jack MacMullin, Tom Seibert, Justin Kraemer and Jeff Wild.

A reception will be following at the Osakis VFW Post #7902 at 12 noon.

To order memorial trees or send flowers to the family in memory of Pauline Kraemer, please visit our flower store.