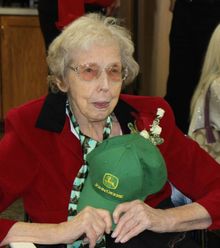 Life History for Philomene Kleinfehn
Philomene Kleinfehn was called home July 6, 2016, only 45 days after her husband, Roman passed away. She was a resident of the Community Memorial Home in Osakis, MN.
Philomene Anna Hoppe was born on September 27, 1923 in New Munich, MN to Herman and Anna (Schaefer) Hoppe. She grew up on a farm and attended country school. As a young woman Philomene did housekeeping work for area farm families for as little as a stick of gum and a dime per week. Later she was hired to do both housekeeping and dietary duties at the St. Cloud Hospital.
She married Roman Kleinfehn in New Munich, MN at the Immaculate Conception Church on June 19, 1951. They began a lifetime of working together and raising their family on farms in Todd and Douglas counties. They were married over 64 years and farmed over fifty of those years, retiring from dairy farming in 1987. She was a member of the St. Alexius Catholic Church and belonged to the St. Anne's Christian Mothers, serving at one time as the treasurer. She belonged to the St. Theresa Mission group, and volunteered weekly at the Community Memorial Home.
Philomene was a wonderful farm wife and mother who enjoyed nature and grew beautiful gardens each summer. She spent hours canning the bounty she grew and was known to bake bread and the best apple pies around. Winter months found her working on one of many quilt projects for either the church or her family. She was a devoted mother, grandma and sister who will be dearly missed by all who knew her.
She is survived by her children, Noreen (Bob) Kleinfehn-Wald of Prior Lake, Harry Kleinfehn of Alexandria and Steve (Randee) Kleinfehn of West Union; 9 grandchildren, 3 great grandchildren; brothers, Edmund Hoppe of Blaine and Alquin (Mary) Hoppe of Crest Hill, Illinois; many nieces and nephews.
Preceding her in death are her parents, her husband, Roman; great granddaughter, Abigail Zander; siblings, Helen Holdvogt, Veronica Nathe, Roman, Raymond, Virgil and Aloys Hoppe.
A Mass of Christian Burial will be held on Wednesday, July 13, 2016 at 11:00 am at the St. Alexius Catholic Church in West Union with Fr. Greg Paffel officiating. Visitation starts that same morning at 9:30 am. Interment is at St. Alexius Cemetery in West Union, MN.
Arrangements were handled by the Roy-Hetland Funeral Home, Osakis, MN.
To view a video tribute of Philomene, click the link below:
http://www.jeannewilberproductions.com/p998525905/h73899b2a#h73899b2a

To order memorial trees or send flowers to the family in memory of Philomene Kleinfehn, please visit our flower store.