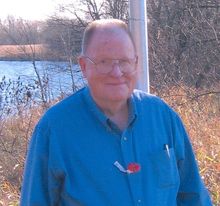 Life History for Ralph Laven
Ralph Laven, age 85, lifelong resident and supporter of Osakis passed away unexpectedly on Sunday, December 26, 2010 at the Community Memorial Home in Osakis, MN, where he was staying while recuperating from recent surgery.
Ralph J. Laven was born on November 13, 1925 in Osakis, MN to Arthur and Carrie (Swore) Laven. He was a graduate of OHS in 1943 and attended Alexandria Tech for blue print reading. He owned and operated the Lakeshore Drive Inn, specializing in homemade fried chicken. From 1944 - 46, Ralph served his country in the US Army during WWII. He achieved the rank of Staff Sergeant and was a squad leader in the European/African theatre, having received a Bronze Star for valor. Upon his return to Osakis, Ralph started his own construction business, Laven Construction Co., which he operated for thirty years. Some notable projects included the Osakis Post Office (building many other post offices throughout Minnesota, as well), Osakis Treatment Plant, St. Agnes School, the Community Memorial Home and the Osakis Lutheran Church. Ralph also served as the building supervisor for the early building project of the Douglas County Hospital. In addition, Ralph was a land developer, who converted two Osakis area farms into residential developments. In addition to his construction business, at one time Ralph also operated antique stores in Osakis, Alexandria and Sauk Centre and a youth center in Sauk Centre for five years.
On June 19, 1949 Ralph was united in marriage to Bette Graham at Calvary Lutheran Church in Alexandria. They lived in and contributed to the vitality of the Osakis area for the rest of their lives.
Ralph was a very active civic leader and served on many Osakis community boards and projects. He was a past Osakis City Councilman (serving on the Planning and Zoning board) and Osakis Chamber of Commerce member. He also served on the OEDC board, the Osakis Onward committee, the Osakis Information Center, Osakis Jobs, Inc., the Osakis Area Heritage Center, the Osakis Senior Citizens Club, Osakis Sportsman's Club and was on the original board of directors for the Osakis Country Club. He was on the Galeon/Community Memorial Home board and was a lifetime member of the Osakis V.F.W. Post #7902. In 2008, Ralph received the Jefferson 'Unsung Heros' Award, in honor of his achievements and contributions through public and community service.
As a member of the Osakis Lutheran Church, Ralph served four terms as a Church Trustee and was active on many church committees throughout the years.
In addition to all of his volunteer activity, Ralph had many interests and hobbies. He liked to golf, hunt, fish, go antiquing, work on his hobby farm and collect coins and old cars. He was often seen taking long, leisurely drives around Lake Osakis enjoying the beautiful sunsets.
He was a kind and loving father, grandpa and brother, and was an irreplaceable contributor to the Osakis community. He will be dearly missed by his family, friends and the town he loved so much.
Ralph is survived by his children, Barbara (Gary) Marler of Enid, Oklahoma, Pamela (James) Allison of Gloucester, VA, Robert (Kay) Laven of St. Louis, MO, JoAnn (Dale) Rieland of Alexandria, David (Shari) Laven of Osakis, Eric (Pam Schelling) Laven of Chanhassen, MN; 6 grandchildren, Stephanie (Eric) Stevenson, Page (Ryan Michog) Rieland, Jessica (Spencer) Soles, Jill (Todd) Blaylock, Nicholas (Brittany) Laven, Matthew Laven; 10 great grandchildren; two brothers, Harold (Roberta) Laven of Osakis, Ted (Shirley) Laven of Junction City, KS; one sister, Janet Laven of Topeka, KS; many nieces and nephews.
He is preceded in death by his parents, wife, Bette in 1998, an infant sister and two son-in-laws, Dana Sell and Ray Zellner.
Funeral services were held on Thursday, December 30, 2010 at 1:00 pm at the Osakis Lutheran Church with Rev. Ron Calvert officiating. Musicians were organist, Pat Converse and soloist, Dana Hetland. Honorary pallbearers were the board members of the OEDC, Galeon and Osakis Onward. Active bearers were Richard and Mark Laven, Scott Erickson, Rodger Larson, Jim Ritten and Ryan Michog. Interment was at the Lakeside Cemetery in Osakis, MN with military honors provided by the Osakis VFW Honor Guard.

To order memorial trees or send flowers to the family in memory of Ralph Laven, please visit our flower store.