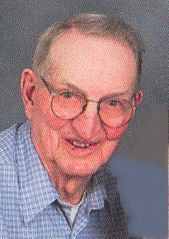 Life History for Ray Mensen
Ray Mensen, age 88 of West Union passed away on Saturday, April 24 at his daughter's home in Browerville, MN.
Raphael Aloysius Mensen was born on October 19, 1921 in Hudson, WI to Gerhard and Clara (Vaske) Mensen. At the age of three, he moved with his family to Wilmont, MN. After his schooling, he served his country during WWII in the US Navy. After his honorable discharge in 1945, Ray returned to Minnesota and on September 17, 1946 married the love of his life, Alice Vortherms in Wilmont, MN. They began farming near Adrian, MN and then moved several times, farming in Rosen, Hardwick and again back near Adrian. When they moved to central Minnesota they farmed for thirteen years on a farm near Sauk Centre and then for the next twenty years they farmed near Long Prairie, MN. In 1989, they moved into a home in West Union, MN. During his lifetime Ray milked dairy cows, raised hogs, beef and chickens. He enjoyed farming and loved living in the country. He retired from farming in 1991. Ray was a member of the St. Alexius Catholic Church in West Union and more recently the Immaculate Conception parish in Osakis. He belonged to the Catholic Aid Association.
Beside working out in the fields and picking rock, Ray enjoyed tending his rhubarb patch, relaxing with his beer and peanuts and getting together with the neighbors for a good game of cards. He was involved at the Osakis Senior Center and was especially devoted to caring for his wife, Alice who is a resident at the Community Memorial Home in Osakis.
Ray is survived by his wife of 63 years, Alice Mensen of Osakis; his children, David (Katharine) Mensen of Waite Park, Alan (DelRae) Mensen of Browerville, Stanley (Cindy) Mensen of Grey Eagle, Mary (Joe) Lamusga of Browerville, Marvin (Deb) Mensen of Osakis, Carol (Randy) Witt of Henning, Daniel (Diane) Mensen of Grey Eagle, Gregory (Carol) Mensen of Lake Benton, Theresa (John) Witstine of Buffalo, Bernice Mensen of Sauk Centre, Paul Mensen of Hutchinson, Eugene (Vanessa) Mensen of Sauk Centre, Gerald (Catherine) Mensen of Duluth, Wayne (Anita) Mensen of Randall; 39 grandchildren; 20 great grandchildren; many nieces and nephews.
He is preceded in death by his parents, a son, Anthony Mensen who died while serving in Vietnam, an infant daughter, Clara Ann Mensen, grandson, Troy Alan Mensen and a great, granddaughter, Bracy Lynn Mensen; his brothers, Albert, Leonard, Alphonse, Clarence, Edwin and Leo Mensen and his sisters, Marie Kinney, Martha Schmuck, Eleanor Kass, Clairinda Mensen, Hildegaard Walsh and Colletta Mensen.
A Mass of Resurrection will be held on Thursday, April 29 at 11:00 am at the Immaculate Conception Church in Osakis with Fr. David Petron officiating. Honorary pallbearers are all of his grandchildren. Active pallbearers are Anthony Mensen, Patrick Mensen, Jason Lamusga, Jonathan Hedberg, Walter Mensen, Joshua Witt, Eric Witstine and David Hughes.
Inurnment will be at the St. Alexius Church Cemetery in West Union, MN. Visitation hours are from 4 - 8 pm on Wednesday, April 28 at the Roy-Hetland Funeral Home in Osakis and one hour before the service at the church. A parish prayer service is set for 5:30 pm at the funeral home on Wednesday evening.

To order memorial trees or send flowers to the family in memory of Ray Mensen, please visit our flower store.