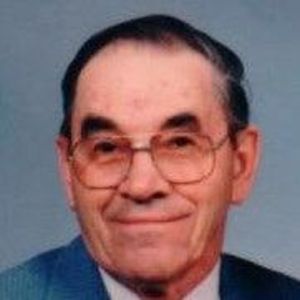 FUNERAL NOTICE FOR RAYMOND FRIE
Raymond Frie, age 95 of Osakis passed away on Wednesday, Oct. 7 at the Community Memorial Home in Osakis. Funeral services will be held on Wednesday, Oct. 14 at 10:30 am at St. Alexius Catholic Church in West Union, MN. Visitation hours are from 5 - 8 pm on Tuesday evening, Oct. 13 at the Roy-Hetland Funeral Home in Osakis and also one hour before the service at the church. The St. Joseph Society rosary begins at 7 pm and the parish prayers are at 7:30 pm at the funeral home on Tuesday evening.

LIFE HISTORY FOR RAYMOND FRIE
Raymond August Frie was born on February 24, 1920 to Joseph and Agnes (Austing) Frie in St. Rosa, MN. He attended school at St. Rosa through the sixth grade. He moved with his family to Ward Springs where he attended the seventh and eighth grades. In 1941 Raymond was drafted into the U.S. Army and went to Fort Sill, OK for basic training. After training, Raymond was involved in a lot of combat in the Pacific Islands during World War II. After four years of service he was honorably discharged. In 1945 Ray started working for various farmers in the Osakis area. On October 21, 1947 he married Loyola Beste at St. Alexius Church. They purchased a farm south of Osakis which they farmed until their retirement. To their union three children were born, Diane, Ruth and Irvin. Ray was a member of St. Alexius Catholic Church in West Union, MN where he spent many years singing in the church choir, was a past member of the parish council and also served as a parish trustee.
Ray enjoyed dancing, playing cards (especially the game 500) and doing word-find puzzles. He especially enjoyed farm work and being with his grandkids. He was a kind and loving husband, father and grandpa who will be dearly missed and lovingly remembered.
Left to mourn his passing is his wife of nearly 68 years, Loyola Frie of Osakis; children, Diane (Gary) Botzet of Carlos, Ruth (Dennis) Pletcher of Alexandria, Irvin (Deb) Frie of Osakis; 4 grandsons, James (Nicole) Botzet of Carlos, Mark Botzet of St. Paul, Kenneth (Katie) Frie of Osakis and Todd (Kristina) Frie of Bowman, ND; 7 great grandchildren, Daryn, Evyn, Koltyn and Graci Botzet, Levi and Ella Frie, Olivia Frie; many nieces and nephews.
He is preceded in death by his parents, 4 brothers, 7 sisters and one great granddaughter, Kortni Botzet in 2010.
A Mass of Resurrection will be held for Raymond on Wednesday, October 14, 2015 at 10:30 am at St. Alexius Catholic Church in West Union with celebrant Fr. Andrew Marthaler, assisted by Steve Wielenberg. The lector is Mark Botzet and the crossbearer is David Marthaler. Giftbearers are Nicole Botzet, Kristina and Katie Frie. Musicians are Julie Bottelberghe, Dana & Ginger Hetland and the St. Alexius Choir. Interment is at the church cemetery with honorary pallbearers being his seven great grandchildren. Active pallbearers are Jim and Mark Botzet, Todd and Kenny Frie, Bonnie Konsor and Joan Hennington. Military honors are provided by the Osakis VFW Post #7902 and MN National Guard Honor Guards.
Arrangements by the Roy-Hetland Funeral Home in Osakis, MN.

To order memorial trees or send flowers to the family in memory of Raymond Frie, please visit our flower store.