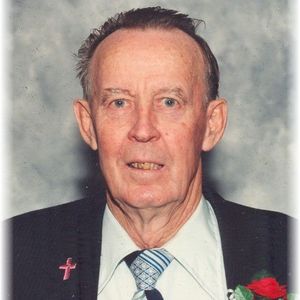 LIFE HISTORY FOR RAY MIKKELSON
On October 29, 1929 a baby boy was born to Mikkal and Olga (Johnson) Mikkelson in Gordon Township, Todd County, MN. He grew up on the family farm and attended country school. He would devote much of his working life to farming the land he was raised on. Raymond married his sweetheart, Nora Kleppen at the Sauk Valley Church on May 5, 1951. He left his home the next year to serve his country during the Korean War. He was a Corporal in the U.S. Army from 1952 until his honorable discharge in 1954. Ray was in the 3rd Infantry Division, Heavy Mortar Co., 3rd Platoon and he received the Korean Service medal with two Bronze Service Stars, the United Nations Service Medal, the Combat Infantry Badge, the National Defense Service Medal and the Good Conduct Medal. After returning home after the war, Ray continued farming and also took a job as a bus driver for the Osakis Public Schools. He drove hundreds of Osakis children during his 42 years driving and retired from the route in 2005. For 18 years during this time, Ray also worked as a substitute mail carrier for the U.S. Postal Service. He and Nora moved off of the farm and into a home in Osakis in 1995, until deteriorating health prompted a move to the Galeon in 2010.
Ray was a life-long member of the Sauk Valley Lutheran Church in rural Osakis and was very active in the church choir and as a former church trustee. Ray was a gifted singer and with his wife, Nora, they sang and performed for countless weddings, funerals and various church celebrations throughout the years. Ray was also a member of the Gordon Men's Chorus and loved the singing, camaraderie and socializing the group provided. As a native to the Osakis area all of his life, Ray knew much about the town and surrounding area. He was also very proud of his Norwegian heritage. Being quick-witted, Ray enjoyed visiting with people and with a twinkle in his eye, would soon be telling a story or joke and making a new friend.
Ray is survived by his children, Sharon (Steve) Fredrickson and Tom (Roxan) Mikkelson, all of Osakis; 6 grandchildren, Eric (Katie) Fredrickson, Lars Fredrickson and Bjorn (Yeisa) Fredrickson, Michael Mikkelson, Samantha (Brett) Hoium, Bradley Mikkelson; 2 great grandchildren, Nora and Lilia Fredrickson; six sisters, Katherine Marthaler of Sauk Centre, Thelma Marthaler of Sauk Centre, Arlene (Ken) Sorenson of Osakis, Lela Sax of Sauk Centre, Charlotte Schultz of Osakis and Marian Brynjulfson of Sauk Centre; a sister-in-law, Shirley Gillan of Sauk Centre; many nieces and nephews.
He is preceded in death by his parents, his wife, Nora Mikkelson in 2001; two brothers, Harold and Merlin Mikkelson.
Funeral services were held Saturday, Dec. 28, 2013 at 2:00 pm at the Sauk Valley Lutheran Church in Osakis with Rev. Steve Hilde officiating and the message given by Rev. Ralph Peterson. Musicians were Vicki Larson and Robin Helgen. Internment is at the Sauk Valley Lutheran Church Cemetery. Casket bearers are Philip, Nathan, David, John, James and Karl Larson.

To order memorial trees or send flowers to the family in memory of Raymond Mikkelson, please visit our flower store.