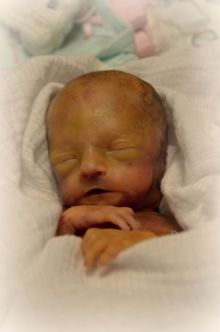 REGAN JANE BOTTELBERGHE, infant daughter of Josh and Sam (Schoneman) Bottelberghe of Osakis was chosen to be with the Lord on Thursday, November 27, 2014. She was one of twin girls born on Tuesday, November 25, 2014 at the St. Cloud Hospital in St.Cloud, MN. Regan is survived by her parents, her twin sister, Reese and her brother, Lee Bottelberghe; paternal grandparents, Leo and Deb Bottelberghe of Minneota, MN and maternal great grandmother, Harriet Winter of Worthington, MN; several aunts, uncles, and cousins. She is welcomed with a Heavenly hug by her maternal grandparents, the late Jim and Mildred Schoneman, and her Aunt Gina Gruenes, whom she was named after.
A Mass of Resurrection will be held for Regan on Wednesday, Dec. 3, 2014 at 11:00 AM with a visitation at 10:00 AM at the Immaculate Conception Catholic Church in Osakis with Father David Petron officiating. Honorary bearers are her Godparents, Jessica Sather and Matt Schoneman.
Arrangements are being handled by the Roy-Hetland Funeral Home in Osakis, MN.

To order memorial trees or send flowers to the family in memory of Regan Bottelberghe, please visit our flower store.