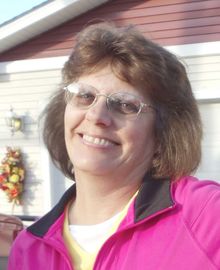 Renee Wiegert, age 62 of rural Long Prairie left this world for her new life on Monday, July 11, 2016 at her home, surrounded by her family.
On October 7, 1953 a daughter was born to Lyle and Iva (Riemann) Sellers in Austin, MN. They named her Renee Christine and she was one of four children born to them. She graduated from Austin High School in 1972 and on December 23 of that same year she married her sweetheart, Edwin Wiegert in Austin, MN. They lived in Brooklyn Park and Renee found work as a machinist at Graco Corporation. In 1984 they moved to a farm in Todd County north of Osakis. Five years later they moved to their present location where they crop farm and raised hogs for many years. Renee was active on the farm and loved to drive tractor. They raised three daughters and enjoyed the life they built in the country.
Besides her love for country living, Renee also enjoyed horses, working in her flower garden, bowling and golfing with friends, and playing cards, especially the years with her 500 card club. She was a life member of the V.F.W. Auxiliary.
For the past nine years she looked forward to wintering in Henderson, Nevada, to soak up the warm sun. Besides spending time with family in Henderson and Phoenix, she and Ed enjoyed many trips throughout the Southwest. Renee will be remembered for her kind and caring nature, her warm smile, contagious laugh, and her effortless ability to quickly befriend strangers.
She was immensely loved and will be deeply missed by her family and many friends.
She is survived by her husband, Ed Wiegert of Long Prairie; three daughters, Lisa (Jeremy Voyles) Wiegert of Alexandria, Gina (Cristine de Leon) Wiegert of Henderson, NV, and Sara (Joey Jensen) Wiegert of Las Vegas, NV; two grandsons, Kyle and Darrin Voyles; siblings, Judy (Sam) Skogeboe of Austin, MN, David Sellers of Menahga, and Lyle (Sierra) Sellers, Jr. of West Concord, MN.
She is preceded in death by her parents.
A celebration of her life will be held on Saturday, July 16, 2016 at 11:00 am at the Osakis Lutheran Church with Rev. Rich Fitzer officiating.
Honorary pallbearers are Carol Kral, Barb Trisco, Ronnah Schoeck, Joan Weldele, Judy Collins and Harriet Sibell. A gathering time will begin at the church one hour prior to the service.
A reception with lunch will be held afterwards at the Osakis VFW Post # 7902 in Osakis, MN.
Arrangements handled by the Roy-Hetland Funeral Home, Osakis, MN.

To order memorial trees or send flowers to the family in memory of Renee Wiegert, please visit our flower store.