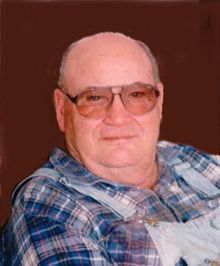 LIFE HISTORY FOR RICHARD HAWKINS, SR.
Richard Hawkins, Sr, age 90 of Osakis passed away on Sunday afternoon, June 28, 2015 at Becky's on the Lake in Osakis, MN.
Richard Blake Hawkins was born on April 28, 1925 in Osakis Township, Douglas County, MN to Claude and Ruth (Afflerbaugh) Hawkins. He married Ida Topp on June 25, 1955 at the Farmington Lutheran Church. Richard bought a farm north of Osakis in 1961. In addition to full time farming, Richard also worked for a pole barn company in Nelson, MN and also for the Northern Pacific Railroad and sold hay for many years to area farmers.
Richard was a member of the Fahlun Lutheran Church and served on the church council, helped with maintenance and was the cemetery sexton for many years.
When he found any free time, Richard loved to go hunting and fishing. He raised buffalo at one time and was always happy when out driving tractor. He was a handyman who liked to do carpentry work and even found time to work out in their large vegetable garden. During the winter months he enjoyed cheering on his favorite MN sports teams.
He is survived by his children, Richard (Liz) Hawkins, Jr. of Casselton, ND, Tim (Joyce) Hawkins of Nelson, Mike Hawkins of Apple Valley, Bev (Joe) Guyette of Osakis; 10 grandchildren; 4 great grandchildren; sisters, Dorothy Hartmann of Osakis, Gladys Campbell of Hemet, CA; 4 sisters-in-law, Deloris Hawkins and Marlys Hawkins of Osakis, Marilyn Covey of Nisswa, MN, and Gloria Topp of Hanska, MN; many nieces and nephews.
Ready to greet him in heaven is his wife, Ida who passed away in 1997, his parents, brothers, Glenn, Roger, Donald, Max and Laddie Hawkins; a granddaughter, Angeline Hawkins and a daughter-in-law, Shelley Hawkins.
Memorial services for Richard will be held on Saturday, July 11 at 11:30 am at the Fahlun Lutheran Church in Nelson, MN with Rev. Jeremy Pedersen officiating. Visitation will start 2 hours prior to the service at 9:30 am.

To order memorial trees or send flowers to the family in memory of Richard Hawkins, please visit our flower store.