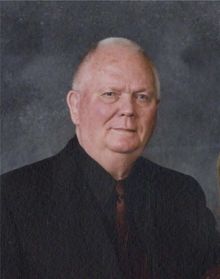 Richard Johnson, age 79 of Osakis passed away early on Friday, October 31, 2014 at the Community Memorial Home where he was a resident.
Richard Allen Johnson was born on June 23, 1935 in Osakis, MN to Harry & Bernice (Thompson) Johnson. He moved with his family to Robbinsdale and graduated from Robbinsdale High School in 1953. He served his country in the U. S. Army. When he returned to civilian life, he lived in Twin Cities and used his athletic skills to become a professional wrestler. He was known as 'Dick the Bruiser' and enjoyed his time in the ring. Dick was married and had two sons, Mike and Mark with his first wife, Joanne. He later married Susan Ingman and they had one son, Cody. Dick's full time job was managing commercial cleaning businesses. He retired in 1997. Dick moved back to his hometown of Osakis several years ago.
Dick was an avid sports fan, especially for all of the Minnesota teams, with the Vikings being his favorite. He enjoyed making people laugh and was a great storyteller. He loved his dogs and life near the lake.
He is survived by his children, Michael (Carlene) Johnson of Pine City, MN, Mark (Janette) Johnson of Brooklyn Park, MN and Cody (Sarah Bouchard) Johnson of Maple Grove; 5 grandchildren, Justin, Derek, Daine, Chantelle and Tyler; his brother, Robert (Lisa) Johnson of Iowa and a sister, Carole (Karl) Davis of Crystal, MN; several nieces and nephews.
Preceding him in death are his parents.
Funeral services will be held on Tuesday, Nov. 4, 2014 at 11:00 am at the Roy-Hetland Funeral Home in Osakis with Rev. Gail Spratt officiating. Inurnment is at the Salem Church Cemetery in rural Osakis with honorary bearers being the staff at the Galeon campus in Osakis. A reception to celebrate his life will follow at the Osakis Lutheran Church fellowship hall.
Arrangements by the Roy-Hetland Funeral Home in Osakis, MN.

To order memorial trees or send flowers to the family in memory of Richard Johnson, please visit our flower store.