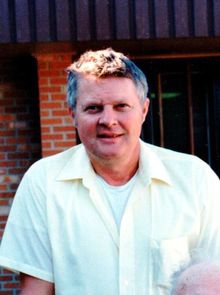 Richard Alan Thompson, 76, passed away peacefully on July 14, 2014 after a long, hard-fought battle with prostate cancer. A funeral service and burial with military honors will be held at 11 a.m. on Saturday, July 19th at Calvary Lutheran Church, Little Sauk, MN. Richard was born on December 29th, 1937 to Everett and Lyda Thompson in Little Sauk, MN. He grew up on the farm, developing a strong work ethic and working in the fields. He graduated from Long Prairie High School and joined the military, volunteering for service on April 18th, 1956. He went on to serve in the 82nd Airborne Division as a paratrooper. He also participated in the 1957 Presidential Inaugural Parade for President Dwight D. Eisenhower in Washington D.C. After his military service, he started his life-time career as a printer in Atlanta, GA and served as president of the Atlanta Litho Club for two years. After moving back to Minnesota in 1975, he and his wife, Janet, opened a printing and office supply business in Glenwood, MN. One of Richard's hobbies was carpentry. He, with the help of his uncle, Maylyn, built a farm house on 80 acres of land where Richard's dreams of farming were realized. After successfully running their business for 39 years, Richard and Janet retired in 2013. Richard was a devoted husband and father, a man of integrity and grace in the face of hardship, who believed in the value of hard work and honesty. He was also a man of great faith who believed in Jesus Christ as his Lord and Savior. Richard is survived by his loving wife of 40 years, Janet, his children, Terry (Mike), Brian, Corinne (Al), Lesley (John), Nicky, Geoff (Angie), Richie (Pam), and Amanda (Rob) and many grandchildren and great children, and brother Bob (Judy), sister Rhoda, and sister-in-law Lola. He was preceded in death by his parents, Everett and Lyda, and brother Gene.
"He who is remembered, never dies."

To order memorial trees or send flowers to the family in memory of Richard Thompson, please visit our flower store.