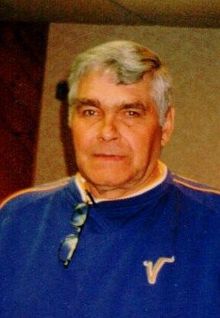 Life History for Robert 'Bob' George, Jr.
Robert 'Bob' George, Jr., age 72 of Osakis died unexpectedly Tuesday, January 13, 2015 at the Douglas County Hospital in Alexandria, MN after suffering a fatal brain injury.
On July 13, 1942 a son was born to Robert and Inez (Thornquist) George in rural Todd County, MN. They named his Robert, Jr. and he was baptized into the Lutheran faith at the Salem Lutheran Church in rural Osakis, MN. Bobbie, as he was known, would attend Osakis High School and graduate with the Class of 1960. On October 26, 1963 he was united in marriage to Mary Kennedy at St. Mary's Catholic Church in Long Prairie. He did electrical work with his Dad after high school and then served his country in the United States Air Force. After his honorable discharge, Bob returned to do home construction and electrical work until his retirement in 2002. He was a proud volunteer on the Osakis Fire Department for twenty six years.
Besides his love for family and the joy being a Grandpa brought him, Bob also enjoyed vintage cars, collecting toy tractors, snowmobiling and deer hunting. He had a green thumb for growing things and had beautiful flower gardens each year. He volunteered his time at the Osakis Senior Center and belonged to the Long Bridge Lutheran Church. He will be dearly missed by his family and friends.
He is survived by his wife of 51 years, Mary George of Osakis; his children, Robert (Cathy) George, III of West Point, Utah, Chris (Jenni) George of Osakis, Stephanie George of Sauk Centre; 8 grandchildren; a sister, Loxy (Patrick) Nelson of Blaine and a brother, Nathan George of Osakis; sister-in-law, Marie George of Sauk Centre; many nieces and nephews.
Bob is preceded in death by his parents, brothers, Dwight and Roger George; niece, Billie Jo George; father and mother-in-law, Bud and Lorraine Kennedy and a son-in-law, Neil Marty.
Memorial services for Bob will be held on Saturday, January 17 at 11:00 am at the Long Bridge Lutheran Church in Little Sauk, MN with Rev. Steve Hilde and Chaplain Jeff Tacker officiating. Musicians are Ione Johnson, Emma and Bonnie Quistorff, Dana Hetland. Honorary bearers are the active and retired Osakis Firemen, Nathan George, Patrick Nelson and the friends gone before him. Active urn bearers are his grandchildren, Jakelie, Alexis, Robert, IV, Kennedy, Elizabeth, Reggie, Justin and Carter. Inurnment will be this spring at the Long Bridge Church Cemetery in Little Sauk, MN.

To order memorial trees or send flowers to the family in memory of Robert George, please visit our flower store.