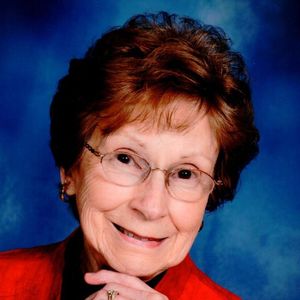 Roberta Laven, age 86 of Osakis peacefully entered into her new life on Tuesday, Feb. 28, 2017 from the Bethany Home in Alexandria with her family by her side.
On April 8, 1930 a beautiful baby girl was born to Robert and Neatta (Clay) Ritchie in Osakis, MN. She was their only child. She attended Osakis Public School and graduated with the Class of 1948. Roberta first worked as a secretary for the school until she was married to Harold Laven on November 2, 1948 at Osakis Lutheran Church. After raising a family of two daughters and two sons, Roberta began working in the law office of Paul Flora. After a couple of years an opportunity arose and she was hired by the First National Bank of Osakis as a bank teller. She retired in 2000 after thirty faithful years at the local bank, where her gentle and efficient manner made a lasting impression. Roberta was a lifelong member of the Osakis Lutheran Church and belonged to the Miriam Circle. She also volunteered by teaching both Sunday School and Vacation Bible School.
Roberta belonged to a Red Hat club for many years and also enjoyed her 'Monday Night Burger' group. She was well known as an immaculate housekeeper and often joked that her favorite hobby was 'dusting.' Going on yearly camping trips with the family was a highlight for Roberta and she enjoyed going ice fishing each winter. She also liked to square-dance and socialize with her neighbors and friends. Roberta had a love for animals, especially the seven dogs she had as pets throughout her life. They were always treated like part of the family. She was a kind and loving mother and grandma who will be dearly missed by all who knew her.
Roberta will live on in the memories of her children, Carol (Don) Nack of Alexandria, Jane (Kevin) Mohror of Waconia, Richard (Debbie) Laven of Dundas, MN, Mark (Julie) Laven of Buffalo, MN; 10 grandchildren and 16 great grandchildren. She is preceded in death by her parents and her husband, Harold who died June 25, 2012.
Funeral services for Roberta will be held on Sunday, March 5, 2017 at 2:00 pm at the Osakis Lutheran Church with Rev. Rich Fitzer officiating. Musicians are organist, Vicki Hinrichs and soloist, Kelly Smith. Pallbearers are her grandchildren, Jason Gustafson, Carrie Zack, Mindy Louwagie, Laura Gustafson-Oswald, Darcy Nack, Shaun Laven, Kelly Myrvik, Brooke Zumbusch, Alison Swieton and Justin Laven. Interment is at the Gordon Pleasant Hill Cemetery in rural Osakis, MN. Arrangements handled by the Roy-Hetland Funeral Home in Osakis, MN.

To order memorial trees or send flowers to the family in memory of Roberta Laven, please visit our flower store.