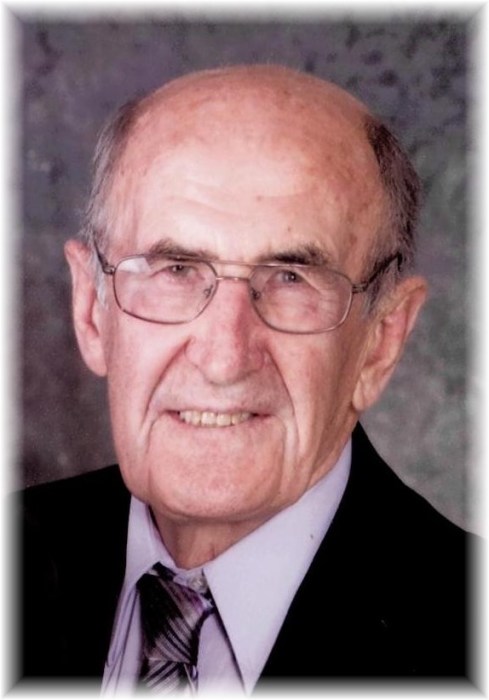 Bob was welcomed into his Savior’s arms on September 10, 2018.  He was at the Lakewood Health System hospital in Staples, MN.  He died peacefully surrounded by his loving family.

Robert Harry Ferris was born on July 20, 1931 at the family farm near Osakis, MN to Harry and Alma (Reichmann) Ferris.  He grew up and attended what was known as the Two Mile School House through the sixth grade and graduated in 1949 from Osakis High School.  He married his classmate Marlys Reddick on September 1, 1952 and were blessed with two sons.

Bob made a life-long career in dairy and grain farming. Bob loved what he did and he loved working side by side with his sons.  In fact, milking cows was a favorite part of his day.  His hard work and dedication resulted in him earning the Outstanding Young Farmer award, the Premier Dairyman Award and numerous other awards for dairy production and quality.

Along with farming, Bob and his sons took on a Pioneer Seed dealership. Bob served on several boards including the MN Holstein Association and DHIA, Douglas County Planning and Zoning, Elder Network, church council, and the Osakis School Board.  He volunteered many hours for Habitat for Humanity and Elder Network. Bob and Marlys were members at Our Saviour’s Lutheran Church in Nelson.

Bob had a quick smile, a great wit and made friends with ease.  Besides being very hard working, many friends describe Bob as being a very kind man.  He could visit with anyone and always had a story or two to share. In his earlier days, Bob loved to go bowling, dancing and playing in neighborhood card clubs. He was a natural runner, who kept himself in shape.  He’d jump off one tractor and run to the next. In retirement, he kept on running; he would go on evening runs and once ran to a first-place finish in the 60+ age group at a Just Like Grandma’s 5K race.  Other interests included hunting coon, coyote, fox, and deer. Bob treasured any time he got to go fishing, especially on Ten Mile Lake! He would even adjust his work schedule so he could attend many of his grandchildren’s events.

Bob was a devoted and loving husband, father, grandfather, and great-grandfather.   Bob recently celebrated the 66th wedding anniversary with Marlys, who truly was the love of his life. He will live on in the hearts of his family, especially his wife, Marlys Ferris of Osakis, his sons and daughters-in-law, David and Cindy Ferris of Hackensack, MN and Bruce and Connie Ferris of Osakis; 6 grandchildren and their spouses: Angie (Tony) Arnold, John (Lacey) Ferris, Kelly (Steven) Schneider, Brian (Katie) Ferris, Keith (Megan) Ferris, and Kristin (RJ) Deutsch; 18 great-grandchildren; one brother-in-law Tom Reddick, nieces and nephews, and many other relatives and friends.

Bob is preceded in death by his parents and a brother and sister-in-law, Kenneth and Mary Lou Ferris.

Memorial services will be held on Saturday, Sept. 15, 2018 at 2:00 pm at Our Saviour’s Lutheran Church in Nelson with Rev. Nathan Hanson officiating.  Organist is Faye Lee. Inurnment is at Kinkead Cemetery in Alexandria with honorary bearers by his six grandchildren, nephew and niece, Mark Ferris and Marcia Ferris.  Urn bearers are John Ferris and Brian Ferris.

To order memorial trees or send flowers to the family in memory of Robert 'Bob' Ferris, please visit our flower store.