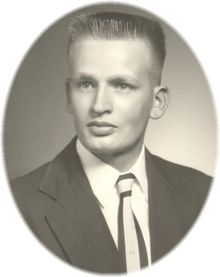 Life History for Roland Kulzer
Roland Kulzer, age 74 of Osakis, formerly of Greenwald, MN left his earthly life on Tuesday, April 23, 2013 from the Community Memorial Home in Osakis, MN.
On April 26, 1938 a son was born to John N. and Rose (Tillman) Kulzer in Greenwald, MN. He grew up and attended school, graduating from Melrose High School in 1957. His first job was with the Cold Spring Granite company. He then served his country in the U.S. Army.
After the service, Roland moved out west in 1959 and settled in Buena Park, CA where he worked for fifty years at a manufacturing facility that specialized in fiber glass. He was proud to have helped make the Apollo Lunar Space Module which was used for landing on the moon. Roland retired in 2000. He also cared for his mother for many years. In 2011, Roland moved to Osakis, MN and made his home at the West View Assisted Living apartments.
Always interested in staying fit, Roland enjoyed strenuous activities such as swimming, exercising and camping. He also liked to fix things and tinker on various projects. He was a whiz at doing puzzles and also found pleasure in listening to classical music and attending operas. He was a kind and caring brother and uncle who will be fondly remembered by all who knew him.
Roland is survived by his siblings, Lorraine Weisser of Sauk Centre, MN, Raymond Kulzer of Anaheim, CA, Amella (Joe) Sabourin of Fair Oaks, CA, Joan (Ray) Kraemer of Alexandria, MN, Millard Kulzer of Dana Point, CA, Marilyn Muellner of Sauk Centre, Judy Johnson of Merrifield, MN, Jane Doege of Sauk Centre and Rosemary (Willis) Dale of Shreveport, LA; many nieces and nephews.
He is preceded in death by his parents, John and Rose Kulzer and siblings, Viola, Edmund and John Kulzer.
A Mass of Resurrection will be held on Friday, April 26 at 5:00 pm at St. Andrew's Catholic Church in Greenwald, MN with Fr. Omar Guanchez officiating. Inurnment is at the church cemetery. A gathering time will begin at the church at 4:00 pm on Friday.
Arrangements by the Roy-Hetland Funeral Home in Osakis, MN.

To order memorial trees or send flowers to the family in memory of Roland Kulzer, please visit our flower store.