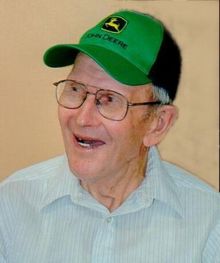 LIFE HISTORY for ROMAN KLEINFEHN
Roman Kleinfehn, age 91 of Osakis passed away on Saturday evening, May 21, 2016 at the Galeon in Osakis, MN.
On December 3, 1924 a son was born to Oscar and Marie (Selensky) Kleinfehn in West Union Township, Todd County, MN. They named him Roman Joseph and he was the youngest of their three sons. Tragically, his father, Oscar died when Roman was only ten years old, so even at an early age he had to assume responsibility in helping to run the family farm. He was married to Philomene Hoppe on June 19, 1951 in New Munich at the Immaculate Conception Catholic Church. They farmed for over fifty years in Todd and Douglas Counties. Roman was proud to say he planted and harvested for fifty-two seasons and kept the farm producing all of those years. He retired from dairy farming in 1987 but continued to live and work on the farm. He was a member of St. Alexius Catholic Church in West Union and volunteered as an usher, and enjoyed parking cars at the West Union Sausage Supper.
Roman loved country living and working with the animals and the land. He had a knack for fixing farm equipment and especially enjoyed working on two-cylinder John Deere tractors. Another of his interests was visiting both State and National parks. The Kleinfehns traveled to many over the years and enjoyed adding new ones to their list. Roman was a life-long learner and spent many hours reading the Bible and encyclopedias. His family will remember his warm smile and humble, hard-working example. His famous reply when faced with life's challenges was "I guess I'm just going to have to make the best of it!" That positive outlook helped him throughout his life. He will be dearly missed and fondly remembered by his family, neighbors and many friends.
He is survived by his wife of 64 years, Philomene Kleinfehn of Osakis; his children, Noreen (Bob) Kleinfehn-Wald of Prior Lake, Harry Kleinfehn of Alexandria and Steve (Randee) Kleinfehn of Sauk Centre; 9 grandchildren and 4 great grandchildren. Preceding him in death are his parents, a great granddaughter, Abigail Zander and two brothers, Vincent and Roderick Kleinfehn.
Funeral services for Roman will be held on Friday, May 27, 2016 at 11 am at St. Alexius Church in West Union with Fr. Greg officiating. Musicians are the church choir with Julie Bottleberghe as organist. His daughter, Noreen will speak at the service and the urnbearers are Harry and Steve Kleinfehn and Ryan Kleinfehn. A visitation will be held beginning on Friday at 9:30 am at the church. Inurnment is in the church cemetery. Blessed be his memory.
Arrangements by Roy-Hetland Funeral Home in Osakis, MN
www.royhetland.com

To order memorial trees or send flowers to the family in memory of Roman Kleinfehn, please visit our flower store.