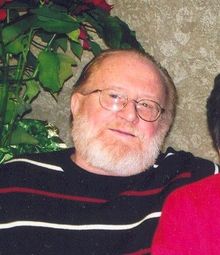 Ronald Proell, age 62 of Alexandria passed away on Friday morning, April 23 at the Douglas County Hospital in Alexandria, MN.
Ronald Edward Proell was born in Sauk Centre, MN to Ervin and Gladys (Wallin) Proell. He was a graduate of Alexandria High School with the Class of 1966. He served his country during the Vietnam War. He was honorably discharged two years later in December of 1968. He also served in the Army National Guard for many years. On June 28, 1975 he was married to Barb Norris. Ron worked a variety of jobs during his lifetime, but the last ten years he was employed at the Arrowwood Resort in Alexandria as a laundry porter.
Ron had many interests and hobbies. He liked to play horseshoes and bean bag toss as well as a variety of games. He also like to fish, garden and go bowling. He was a big sports fan and liked to meet with friends to go dancing or play cards. His greatest pleasure however just came from being around his family and friends.
He is preceded in death by his parent, two sisters, Patricia and Sandra Proell, brother, Bruce Wallin; sister-in-law, Kim Proell, special friend, Lois Peterson.
Surviving him are his children, Michael (Robin Strom) Proell of Browerville, Tammy (Lonnie) Roemhildt of Elysian, MN; special friend, Judy Peterson; Jeff Gunderson of Alexandria; 4 grandchildren; his siblings, Linda (Harvey, Sr.) Bolstad and Debbie Radermacher, all of Alexandria, Cherylle (Ken) Duerr of Freeport, Steve Proell of Fergus Falls, Dave (Shirley) Proell of Alexandria, Kevin (Debbie) Proell of Alexandria; many nieces and nephews.
Funeral services for Ron will be held on Tuesday, April 27 at 11:00 am at the Roy-Hetland Funeral Chapel in Osakis with Fr. Steve Binsfeld officiating. Honorary pallbearers were Michael Proell, Jr., Lyam and Landen Roemhildt, Hannah Randall. Interment will be at the Calvary Cemetery in Osakis. Military honors are by the Osakis VFW Post Honor Guard.
Arrangements are in the care of the Roy-Hetland Funeral Home in Osakis, MN.

To order memorial trees or send flowers to the family in memory of Ronald Proell, please visit our flower store.