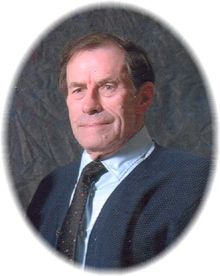 LIFE HISTORY FOR RONALD SHERMAN
Ron Sherman, age 82 of Osakis passed into his new life on Wednesday, April 2, 2014 at the Galeon campus in Osakis, MN.
Ronald David Sherman was born on November 13, 1931 in Osakis to Leonard and Margaret (Bock) Sherman. He grew up on a farm near Oak Hill in Leslie Township, Todd County and graduated from Osakis High School with the class of 1949. He moved to Minneapolis after graduation and began work in a refrigeration plant. Upon his return to the Osakis area, Ron worked at Bellanca Aircraft of Alexandria. He also did car and tractor repair and custom hay bailing in addition to running a saw mill and doing some farming. On November 28, 1970 Ronnie was married to Ruth Swenstad at the Osakis Lutheran Church. They farmed west of Long Prairie and also owned and operated the R & R grocery in Osakis for three years. Ronnie then took a job doing backhoe work for Emblom Construction in Sauk Centre. When the Sherman's moved to Nelson, MN in 1977, they managed the Birchwood Apts. in Alexandria and the Nelson Schoolhouse Apts. in Nelson. Lastly, Ronnie was hired at the General Store in Osakis. He really enjoyed working in retail sales and helping customers. He retired in 2002, but stayed busy by working part time running the local car wash.
Ronnie was a member of the Osakis Lutheran Church and was also a past member and on the church board at Our Savior Lutheran in Nelson, MN.
Ronnie was truly a 'jack-of-all-trades.' He had a life-long interest in working with his hands and was never afraid of trying new things. He liked whittling and working with wood and made many wooden toys, tractors and crafts as gifts for his family and friends. He was even able to build a miniature automobile in his garage that he rode in parades. Ronnie and Ruth also ran a ceramic shop for many years. Ronnie was a deer hunter, a card player and someone who greatly enjoyed just visiting with people. His positive outlook on life was apparent by his gift for whistling throughout his day. He enjoyed music and played both the harmonica and the violin. Most of all Ronnie loved to be with family and his grandchildren were his greatest joy in life. He was a kind and gentle man who will be dearly missed by all who knew him.
Ronnie greatly appreciated the special caregivers working at the Bridgewell Memory unit at the Galeon campus in Osakis, MN.
He is survived by his wife of 43 years, Ruth Sherman of Osakis; 3 children, Barb (Mark) Helgeson of Parkers Prairie, John Swenstad and Howard (Lynnette) Swenstad, all of Osakis; 5 grandchildren; 1 great grandson; a brother, Douglas (Pam) Sherman of Osakis; two sisters, Betty Sherman of Sauk Rapids and Linda Stowe of Osakis; several nieces and nephews. He is preceded in death by his parents.
Memorial services were held on Sunday, April 6, 2014 at 2 p.m. at the Osakis Lutheran Church with Rev. Don Reisig and Rev. Jeremy Pedersen officiating. Musicians are organist, Pat Converse and soloists, Darlene Hendricks, Julie Savoie and Darla Schaefer. Honorary bearers are Dennis Sprague, Lloyd Hendricks, Curtis Cook, Rick Loxterkamp, Don Fernow, Bernie Kreemer, Laurel Bruder.

To order memorial trees or send flowers to the family in memory of Ronald Sherman, please visit our flower store.