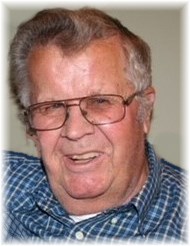 Beloved husband and father, Ronald James Stahlberg, age 90, died peacefully in the comfort of his home in Alexandria, MN on January 31, 2021 with his family around him.

He was born to Arthur and Jennie (Skaar) Stahlberg in Kenmare ND on November 2, 1930. He grew up during the Depression and as a youth, helped his grandfathers with farming and blacksmithing.  He served in the Army during the Korean War. After his service, he married Daisy (Wirch) Stahlberg of Kulm, ND. They were married for 66 years and had 5 children together and 1 grandchild.   Taking advantage of the GI Bill, he graduated from North Dakota Agricultural College (now NDSU) in 1957. After graduation, he worked for the Minnesota State Highway Department before moving his growing family to Moorhead to become the Assistant City Engineer.  Ron worked for over 40 years managing regional water systems in both public and private settings. He was City Engineer of Moorhead MN from 1967-1973 and was a partner in Widseth, Smith, Nolting and Associates in both Crookston and Alexandria MN. He joined Michael Nyberg as the sole engineer to form Stahlberg, Nyberg and Associates in Alexandria. He was particularly proud of his work on the North Kittson County Water Project, which brought municipal water to rural communities.   Retirement wasn’t in Ron’s vocabulary and as an additional career, he became a real estate developer later in life. He owned and operated Woodlawn Mobile Home Park in Garfield, MN, Countryview Apartments in Nelson MN, and Miltona North Mobile Home Park. He had a big heart for helping people find affordable housing and managed the properties right up until his death with help from his daughter, Janet Hammer.

Ron enjoyed woodworking and carpentry throughout his life and many of his family and friends have items he made that are still in use. He loved working on home projects - there was hardly a project he wouldn’t tackle. He built a chimney, retaining walls, put up eaves on the house, and even hauled a snowblower up on the roof once to get that job done.

Ron will be remembered by many for his dry wit and sense of humor. He continued to make his family laugh with his retorts right up until the end. He loved playing cards, telling stories and especially enjoyed the times when he could visit with his granddaughter and son-in-law from Idaho.  He continued to believe in the inherent goodness of people, second chances and redemption. He was a good man and will be remembered by family and so many in his communities for being generous, patient, kind, open-hearted and witty.

If choosing to make a donation in honor of Ron, the family prefers memorials be directed to the Douglas County Hospice, 725 Elm St., # 1200, Alexandria, MN 56308

A memorial and celebration of Ron’s life will be held at a later date when family and friends can safely gather.  Condolences and memories may be left for him at www.royhetland.com under his Tribute Wall.  Roy-Hetland Funeral Home in Osakis was honored to assist with his arrangements.

To order memorial trees or send flowers to the family in memory of Ronald Stahlberg, please visit our flower store.