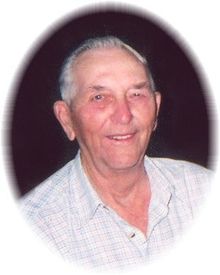 Life History for Roy Heid
Roy Heid, age 94 of rural Nelson, passed away unexpectedly on Friday evening, July 20, 2012 at his rural Nelson home.
Roy Albert Arthur Heid was born at home on September 26, 1917 in rural Morton County near New Salem, North Dakota. He was one of seven children born to Ferdinand and Louise (Seeger) Heid. He was baptized and confirmed in the Lutheran faith. On June 20, 1944 he was united in marriage to Wilma Reuther in Miles City, MT. They farmed near New Salem, ND until moving to a farm in rural Nelson, MN in April of 1959. They raised chickens, hogs, dairy and later beef cattle. Before farming, Roy was a 'jack of all trades' working at many different jobs, such as cherry picking out West, electrical work, construction, trucking and custom combining. His ingenuity and ability to improvise saved them many dollars over the years and helped the farm to run efficiently. Growing up during the Depression, Roy never wasted anything and made full use of the many things they had, including their 54 year old refridgerator. After thirty years farming, the Heid's retired and became snow birds, traveling south each winter. After several years, they began spending winters at the Gateway RV Park in Raymondville, TX. Roy enjoyed playing violin and harmonica in the 'jam sessions' they would have at the Park and for the residents at the nearby Retonia Manor Retirement Home. He enjoyed the people they met at Gateway and in 2006 he was named King of the Park's Mardi Gras festivities. Roy also looked forward to his summers spent back on the farm in Minnesota working with beef cattle and making hay with his daughter, Collette, up until the age of 93. He was a member of the Trinity Lutheran Church of Carlos, MN and served four years on the church board. For over 18 years Roy served on the Cenex board in Alexandria, MN.
Roy had a great love for music, whether playing it or listening to it. A bright spot in his day would be visits with Vicar Phil Petersen when they would begin playing violin duets and having Wilma or whomever was there join in and sing along. Roy also enjoyed traveling across country in their RV. He liked a friendly game of pool, card playing, dancing or just sitting alone with a good book. When living in North Dakota, Roy hunted all sorts of game for supper along with trapping and tanning furs. Later, he enjoyed duck and goose hunting trips to Lac Qui Parle with family and friends. He was a brilliant and faithful man who loved his family very much. He was a hard worker and a wonderful provider. He will be dearly missed.
Roy is survived by his children, Kathleen (Harold) Withers of Osakis, Renee (Mark) Boesen of Pillager, Collette (Bill) Jarvi of Nelson and Bruce Heid of Lander, WY; special son, Mike (Renee) Becker of Garfield; 13 grandchildren; 30 great grandchildren; a brother, Lloyd (Marion) Heid of Mercer, ND and Reuben (Vada) Heid of Hazen, ND; many nieces and nephews.
Roy is preceded in death by his wife, Wilma Heid ( whose funeral was just one week before his death); his daughter and son-in-law, LaVonne and Richard Tweet and an infant daughter, Marsha Heid; grandson, Dennis Tweet and two great grandsons, Trent & Travis Withers; brothers, Arthur, Herbert and Donald Heid and a sister, Florence Zarndt.
Funeral services will be held on Saturday, July 28 at 2:00 pm at the Trinity Lutheran Church in Carlos with Vicar Phil Petersen officiating. Musicians are granddaughter Terri Williams as soloist, Vicar Phil as violinist, and organist, Joan Petersen. Interment is at the Trinity Cemetery in Carlos, MN.
Honorary pallbearers are his grandchildren and active pallbearers are grandsons, Tracy and Trevor Withers, Bill Jarvi, III, Chad Boesen, Shawn and Chris Becker.

To order memorial trees or send flowers to the family in memory of Roy Heid, please visit our flower store.