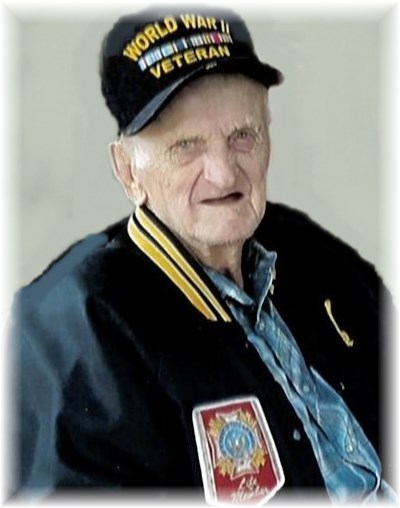 Russ Hevern, age 95, longtime resident of Osakis passed into his new life early Tuesday morning, October 22, 2019 at the Galeon in Osakis, where he was a resident.    Russell Clayton Hevern was born in Hillsboro, North Dakota on August 7, 1924 to Josephine (Lund) and Francis (Irish) G. Hevern.   As a young man of 17, he served his country in the U. S. Army as an infantryman during WW II.  He landed in Guadalcanal and traveled to Guam, New Guinea and the Philippines before he was wounded at Layte.  His injuries included being shot in the face near his cheek and taking shrapnel in the arm and hip.  He proudly served under General McArthur while in the Philippines.  He received the Purple Heart, the Asiatic-Pacific Theatre Service Medal, Philippine Liberation Ribbon w/ Bronze Star, Good Conduct Medal and the Bronze Arrowhead.  He earned an Expert and Combat Infantryman Badge, as well.  After his honorable discharge in 1946, Russ moved to Livingston, MT.  He worked for the Gamble Robinson, hauling groceries up to Yellowstone National Park.  He married Barb Milne during this time and had three children, Linda, Robyn and James Russell.  Russ competed in rodeos, riding broncs, bulls and calf-roping.  He returned to Osakis, and on April 28, 1956 he married Iva Mae Bechtol at Osakis Lutheran Church and they have been married now for 63 years.  They had two children, Rodney and Kim.  He did a number of things while living in MN, such as road and building construction, he worked for Osakis Silo Co, Carlos State Park, assisted local electrician, Hank Fischer, but was mainly a long distance truck driver.  Russ hauled for Didier Bros., Barrett Trucking and Schultz and Son Trucking, retiring in 1986.

He was a devoted member of the Osakis VFW Post # 7902 and their oldest veteran.  He served as a Past Commander, belonged to the VFW Honor Guard for 53 years, and was also a Past All-State Commander.  Russ marched in an untold number of local parades and was honored as Grand Marshall of the Osakis Festival Parade.  He was a member of the Osakis Lutheran Church.

Russ enjoyed socializing at the VFW Post and local cafés.  He knew many in the community and was a fixture around downtown Osakis.  He enjoyed going fishing for sunfish, playing bingo and going dancing.  He loved his family and especially doing things with his grandchildren.

Funeral services will be Saturday, Oct. 26, 2019 at 2:00 pm at Osakis Lutheran Church with Rev. Rich Fitzer officiating.  Organist is Vicki Hinrichs.  Honorary pallbearers are Kearney Frank and the members of the VFW Post Honor Guard and his other VFW Commrades,   Military honors are provided by the Osakis VFW and the MN National Honor Guard.  Interment is at the Pleasant Mound Cemetery in Carlos, MN.  Arrangements by the Roy-Hetland Funeral Home, Osakis, MN

To order memorial trees or send flowers to the family in memory of Russell Hevern, please visit our flower store.