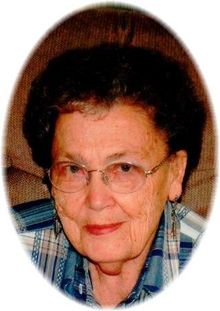 LIFE HISTORY FOR RUTH ANDERSON
Ruth E. Anderson, age 90 years of Long Prairie, went to meet her Lord on Tuesday morning, May 27, 2014 from the Long Prairie Memorial Nursing Home.
Ruth Edith Olson was born on January 7, 1924 in Roseau County, MN to Joseph and Susan (Cole) Olson. As a young girl, Ruth lived with her family south of Warroad, MN and then at the age of six moved into town and lived there until her marriage. She married Arthur Gustaf Anderson on February 7, 1945 at the Reynolds Baptist Church parsonage. They lived and farmed nearby in rural Todd County for many years. Ruth also worked for over twenty-nine years at the Sauk Centre Correctional Institute Home School. She began doing counseling and after additional college courses, she continued to advance her career, eventually becoming a member of the organization's administration, eventually retiring in 1986. Ruth was also a very active member of the Reynolds Baptist Church, having served as a Sunday School teacher, past women's leadership (for over 20 years) and she also sang in the church choir.
Some of Ruth's hobbies included quilting and other craftwork. She loved to bake cookies to have on hand whenever her grandkids or neighbors stopped in for a visit. She was an avid traveler and enjoyed taking trips all across the United States. She eventually made a visit to every state in the union. She was a loving and caring mother, grandma and sister who will be dearly missed by her family and friends.
She is survived by a son and daughter-in-law, Steve and Sylvia Anderson of Williams, MN; a daughter-in-law, Vicki Anderson of Long Prairie; 6 grandsons, Paul (Sarah) Anderson, Seth Anderson, Luke (Becky) Anderson, Jason Anderson, Joshua (Rachel) Anderson and Joel (Marnita) Anderson; 12 great grandchildren; two brothers, Lloyd (Margaret) Olson of Warroad and Max (Rosemary) Olson of Fargo; many nieces and nephews.
Preceding her in death are her parents, her husband, Art in 1989, a daughter Laurie Squires in 1995 and a son, Mark Anderson in 2011; an infant grandson and 3 brothers, Leonard, Howard and Vernon Olson.
Funeral services for Ruth will be held on Monday, June 2, 2014 at 11:00 am at the Reynolds Baptist church in rural Long Prairie with her grandson, Josh Anderson and Chaplain David Greaver as officiants. Interment is at the church cemetery.

To order memorial trees or send flowers to the family in memory of Ruth Anderson, please visit our flower store.