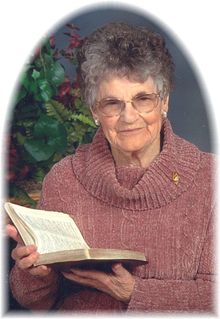 Life History for Ruth Brunton
Ruth Brunton, age 98 of Osakis, MN, formerly of Lyons, NE went to meet her Lord on Saturday, October 2, 2010 from her home at Sharon's Senior Services in Alexandria, MN.
Ruth Ione Christensen was born on a farm east of Lyons, NE to Waldo and Dora (Young) Christensen. She attended Viles country school through the 10th grade and then finished high school in Lincoln, NE, graduating with the Class of 1929. She graduated from Midland College in 1933 in Fremont, NE. While in Lincoln, Ruth was confirmed in the Warren Lutheran Church and while attending college she was active in the Salem Church as a Sunday School teacher. Although she became licensed as a teacher, Ruth discovered that there were no teaching jobs available during the lean years of the Depression. Ruth became active in the Christian Endeavor at Divide Center Presbyterian Church. She taught VBS and Sunday School. Here she met and became engaged to Orland Brunton. They were married on January 1, 1936 at the home of her parents by the pastor of the Lyons Presbyterian Church. They lived on a farm near Tekamah, NE and then east of Lyons, NE. For the next several years Ruth stayed busy raising their family. They built a home in Lyons and later sold it to buy a fishing resort called Paradise Resort on Lake Osakis in Osakis, MN where they moved in 1966. They joined the Osakis Presbyterian church where Ruth was an active member. During the winter months they traveled in their trailer to Corpus Christi, TX and Apache Junction, AZ. Upon the sale of the resort, the Brunton's retired to acreage near their children east of Osakis.
Ruth was happy to babysit her grandchildren and enjoy the beauty of God's creation, enjoying the change of seasons each year. She was a kind and loving mother, grandma and sister who will be dearly missed by her family and all who knew her.
Ruth is survived by her children Marlene Olson of Osakis, Dean & Ann Brunton of Miltona, MN Sharon (Lonnie) Iverson of Osakis, Susan (Dan) Klukken of Alexandria, MN; 8 grandchildren; 20 great grandchildren; 10 great, great grandchildren; a brother, Franklin (Gloria) Christensen of Germantown, MD and a sister-in-law, Hazel Christensen of Castle Rock, CO; many nieces and nephews.
She is preceded in death by her parents, husband, Orland on Sept. 2, 1997; an infant son, Richard Dee Brunton; son-in-law, Arthur Olson; brother, Paul Christensen and sisters, Gladys Preston and Eleanor Saich.
Funeral services for Ruth were held on Thursday, October 7, 2010 at 1:30 pm at the First Presbyterian Church in Osakis with Rev. Tim Sutton officiating. Eulogists were Rev. Dennis Preston and Kevin Iverson. Musicians were Ione Johnson, Rev. Dennis Preston, Kevin Iverson and Dana Hetland. Interment was at the Salem Lutheran Church cemetery in rural Osakis, MN. Honorary bearers were her great and great, great grandchildren. Active bearers were her grandchildren, Debbie Barry, David and Chris Olson, Kevin, Bryan and Jamie Iverson, Theresa Reed and Jeff Klukken.
Arrangements were by the Roy-Hetland Funeral Home in Osakis, MN. Condolences may be left online at www.royhetland.com

To order memorial trees or send flowers to the family in memory of Ruth Brunton, please visit our flower store.