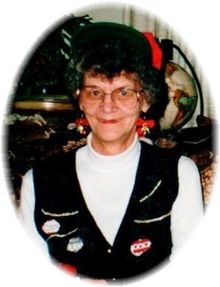 Shirley Gran, age 77 of Osakis, formerly of Minneapolis, passed into her new life on Sunday, December 14, 2014 from the Bridgewell/Galeon facility in Osakis, MN.
Shirley Ann Boisvert was born on August 26, 1937 in Minneapolis, MN to Leo and Ann (Fussy) Boisvert. As a young girl she moved with her family to central Minnesota and graduated from Little Falls High School. Shirley married George Brezinka in Elmdale, MN in 1954. Shirley was hired by Honeywell and worked in the coil-winding division for many years in addition to helping run a catering business with her mother. In 1963 she married Maurice Gran in Sioux Falls, SD. Shirley worked at a Head Start preschool program and also doing retail sales for Ambassador Meat Products. When they retired in 1985, Shirley and Maurice settled near Lake Osakis where they had spent many summers. Shirley was well loved in their neighborhood and due to her caring and kind personality, was also a long time caregiver for several relatives. She helped anyone in need and was always one to think of others before herself. To keep busy in retirement, Shirley worked part time at the local Municipal Liquor store selling fundraising pull tabs. She loved to visit and made friends within minutes. Past times she also enjoyed included dancing, casino trips, card games, traveling and any type of social gatherings. Summer days out fishing or working in her flower garden were other activities she enjoyed. Shirley was also a devoted Twins baseball fan. She was a wonderful mother, grandma and sister who will be dearly missed by all who knew her.
Shirley is survived by her son, Brad Brezinka of Osakis; 2 grandchildren, Zachary and Carli Brezinka; a step son, Gordon (Mari Jo) Gran of the St. Cloud area; step granddaughter, Jackie Gran; dear friend and longtime companion, Jim Mork of Osakis; daughter-in-law, Traci Brezinka of Coon Rapids; brother, Eugene Boisvert of Osakis; brother-in-law, Robert Hansen and sister-in-law, Ramona Boisvert; many nieces and nephews.
Preceding her in death are her parents, her husband, Maurice Gran in 1993; brother, Ives Boisvert; sister, Delsie Hansen and sister-in-law, Peggy Boisvert.
Funeral services for Shirley will be held on Saturday, January 10, 2015 at 11:00 am at the Immaculate Conception Church in Osakis with Fr. David Petron officiating. Honorary pallbearers are Mark Hansen, Pam Johnson, Kim Knutson, Barb Hansen, Rene Lewis and Tonya Hansen. Inurnment is at the Gordon Pleasant Hill Cemetery in rural Osakis, MN.

To order memorial trees or send flowers to the family in memory of Shirley Gran, please visit our flower store.