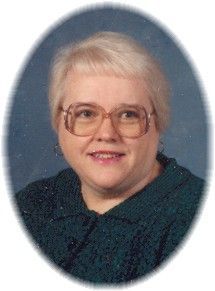 Life History for Shirley Ann Johnson
ShirleyAnn (Neilsen) Johnson was born in Douglas County, MN on December 22, 1935, the daughter of Vergil E. and Hazel (Anderson) Neilsen. In 2000, ShirleyAnn was diagnosed as in the early stages of Alzheimer's disease. At the time she fought desperately to maintain her sanity and independence, but losing the battle, she was admitted to the Fergus Falls Veterans Home on November 22, 2004. She died May 7, 2013 at the age of 77 years.
As a young girl, ShirleyAnn attended several different elementary schools, traveling with her parents as they moved to different parts of the country to find work. Finally the family settled in the Alexandria, MN area where ShirleyAnn completed her education.
ShirleyAnn met Joel M. Johnson of Osakis and they were united in marriage on September 7, 1952 at the Calvary Lutheran Church in Alexandria, MN, a marriage which lasted for 60 years. A short time after their marriage, Joel was drafted into military service during the Korean War. In 1954 they returned back home and began raising four children, three boys, Kevin, Kerry, Kenneth and a daughter, Karen. They moved several times through the years due to employment opportunities. ShirleyAnn played a very important role to successfully excel in married life and keeping a home. As the children grew, she then entered into the work place and also furthered her education with law courses in Bismarck, ND as part of her employment requirements. ShirleyAnn was very much self-educated. She was an avid reader of books on numerous subjects, including many hours spent reading and studying the Bible. She contributed time in church by being part of a women's group at the First Baptist Church in Hudson,WI. Each year a Sunday was designated as Women's Sunday and members were chosen to provide the service. ShirleyAnn gave the sermon two years in a row. During the later twenty-five years of her husband's career, ShirleyAnn provided assistance in writing several high level documents that required professional wording and format. So gifted with a vocabulary, she would slip in a word or two that few knew the meaning of, but to later learn it fit perfectly to complete the message.
ShirleyAnn enjoyed doing crafts, ceramics and cross stitch embroidery. She also enjoyed camping and traveling to various places throughout the United States, Hawaii and New Zealand. She was an excellent cook and cake decorator.
Blessed be the memory of ShirleyAnn Johnson.
ShirleyAnn is survived by her husband, Joel Johnson of Osakis, MN; her children, Kevin (Rhonda) Johnson of Goodhue, MN, Kerry (Sharon) Johnson of Monticello, MN, Kenneth (Cindy) Johnson of Eau Claire, WI and Karen (Scott) Heinert of Mandan, ND; 8 grandchildren and 14 great grandchildren; a brother, Darrell (Carol) Neilsen of Alexandria, MN; many nieces and nephews.
She is preceded in death by her parents, Vergil E.Neilsen and Hazel Neilsen; a brother, Darwin Neilsen and a sister, Charlene Belsaas.
Funeral services for ShirleyAnn were held on Monday, May 13 at the Elim Lutheran Church in Osakis with Rev. Lindell Quam officiating. Musician were Jill Herringshaw and Dana Hetland.
Casket bearers were Dakota Johnson, Damian Lorenz, Anella Liffrig, Jeremy, Charity and Justin Johnson.
Arrangements with the Roy-Hetland Funeral Home in Osakis, MN.

To order memorial trees or send flowers to the family in memory of Shirley Johnson, please visit our flower store.