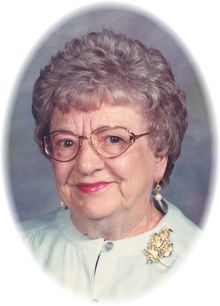 Life History for Shirley Sorenson
Shirley Sorenson, age 90 of Alexandria passed away late Tuesday, January 17, 2012 at the Knute-Nelson Memorial Home in Alexandria, MN.
Shirley Elaine Hanson was born on September 25, 1921 in Osakis to Henry and Mabel (Heen) Hanson. She grew up on a farm just east of Osakis, first attending country school and then graduating from Osakis High School. After spending a year in Seattle at the University of Washington working toward a nursing degree, Shirley's plans changed when she was married on February 11, 1947 in Las Vegas, NV to the love of her life, Herman Sorenson. They settled down on a farm on the west side of Osakis, selling it in 1968, first moving to Osakis and then to Alexandria in 1970. Besides raising her daughter, Shirley also worked at the Bremer Bank in Alexandria for over twenty-two years, retiring in 1980. After her retirement, the Sorenson's really enjoyed going south during the winters to their home in Harlingen, TX.
Shirley was a member of the Osakis Lutheran Church and belonged to the Rebecca Circle. She used her talent and love of music for God's great glory as a member of the church choir. She continued to sing in the church choir all of her life. She also was a member of the Order of the Eastern Star, the New Horizons support group and the Elder Network.
Some of Shirley's interests included golfing, fishing with her husband (including fly-in trips to Canada), and doing needle-work projects. She always had music playing while she was home and was an avid reader. Shirley had a warm and welcoming personality. She was happiest when she could be doing something for someone other than herself. Blessed be her memory.
She is survived by her daughter and son-in-law, Rachel and Terry Narveson of Alexandria, MN. Preceding her in death are her parents and husband, Herman in 1995.
A celebration of life will be held for Shirley on Friday, January 20 at 11:00 am the Osakis Lutheran Church with Rev. Ron Calvert officiating. Musicians are Pat Converse and Dana Hetland. Interment is at the Nelson Cemetery in Nelson, MN with honorary bearers being the Friends of Elder Network, New Horizons and Osakis Lutheran Church. Active bearers are Justin and Jesse Bugher, Mark and Wayne Erickson, Kevin Powers and David McFarlane.

To order memorial trees or send flowers to the family in memory of Shirley Sorenson, please visit our flower store.