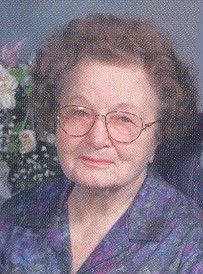 Life History for Stella Brees
Stella Brees, age 93 of Osakis passed into her new life on June 8, 2013 at the Community Memorial Home in Osakis, MN.
Stella Hilda Ferrian was born on November 29, 1919 in Sauk Centre, MN to Louis and Frances (Wiewel) Ferrian. On September 21, 1942 she was united in marriage to Merlund H. Brees in Osakis, MN. They farmed for many years and Stella also helped others by taking in and caring for many elderly people throughout the years. She also worked on the farm and helped care for the many cows, chickens and pigs. She was an excellent gardener and had fields of potatoes, strawberry patches and flowers. She sold dozens of eggs to friends and neighbors. Stella did hours of canning each fall and supplied her family with delicious foods all winter long. She was famous for her homemade fried chicken and angel food cakes. Stella did all of her cooking from scratch. There were no pre-packaged meals used in her house. She took much pride in her baking, cooking and preparing healthy meals for her family.
Stella was a member of the Immaculate Conception Catholic Church in Osakis, MN.
Some of Stella's favorite past times included going to dances, playing cards (especially Whist) and traveling. She was able to take trips to Alaska to see family members there and also enjoyed visiting the Black Hills of South Dakota. She was a kind and hard-working mother, grandma and sister who will be dearly missed by her family and friends.
Stella is survived by her daughter, Elizabeth 'Betty' Sopcyk of Osakis; 4 grandchildren, Lisa (Jerad) Dixon, Mike and Jeff Sopcyk, Jennifer (Mike) Cunningham; 7 great grandchildren; sisters, Agnes (Harold) Grundman of Alexandria and Marcella Briol of Freeport, MN; many nieces and nephews and cousins.
She is preceded in death by her parents, her husband, Merlund in 2008; a son, James Brees in 1994; siblings, Andrew, Walter, John Lewis, Cecil and three infant brothers, a sister, Leona Hendricks.
A Mass of Resurrection will be held for Stella on Thursday, June 13 at 11:00 am at the Immaculate Conception Catholic Church in Osakis with Fr. David Petron officiating. Interment is at the Calvary Cemetery in Osakis, MN. Pallbearers are Bob and Bruce Massmann, Mark Grundman, Allen Hendricks, Johnnie Briol and Mickey Klasen.

To order memorial trees or send flowers to the family in memory of Stella Brees, please visit our flower store.