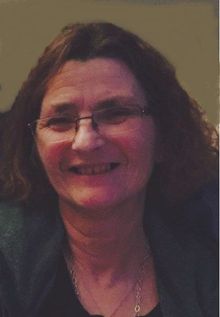 Teresa 'Terry' Schulz, age 59 of Osakis passed away with her family by her side on Saturday evening, Dec. 27, 2014 in her home after a long hard battle with cancer.
Terry was born on January 4, 1955 in Minneapolis, MN to Clyde and Allene (Hanson) Bencker. She graduated from Osseo High School in 1973. She lived in California and then returned later to live in Mankato. On June 9, 1984 Terry was married to Mike Schulz. Over the years they moved to various cities including, Lake Crystal, Heron Lake and finally to a home on Little Lake Osakis in 1996.
Besides the joy being a Nana brought her, Terry also enjoyed riding Harleys and going on camping trips with their 5th wheel. She had a green thumb and enjoyed working in her garden. She belonged to a gardening club and was happy each summer out coaxing new plants to grow. She was also an animal lover with a horse named Stanley, along with a variety of other pets. She enjoyed getting out on the lake fishing, watching movies, doing crafts and playing cribbage. She loved to have her grandkids visit and was a number one Nana to them. She will be remembered for her kindness and love and will be dearly missed by her family and friends.
Terry is survived by her husband, Mike Schulz of Osakis; two children, Brian (Erica) Starkovich of Otsego and Tracy (Joe) Vaa, also of Otsego; 6 grandchildren, Wyatt, Carson, Nolan, Ayden, Halle and Keira; her mother, Allene (Lyle) Pickart of Brooklyn Park; brothers, Cory Bencker of Brooklyn Park and Barry (Mary) Pickart of Cedar Rapids, IA; a sister, Chris (Jeff) Griffith of Derby, KS; several nieces and nephews.
Preceding her in death is her father, Clyde Bencker and a brother, Brett Pickart.
Memorial services will be held for Terry on Friday, January 2, 2015 at 2:00 pm at the First Presbyterian Church in Osakis with Chaplain David Greaver officiating. Visitation begins at the church at 1:00 pm on Friday afternoon.
Arrangements by the Roy-Hetland Funeral Home in Osakis, MN.

To order memorial trees or send flowers to the family in memory of Teresa Schulz, please visit our flower store.