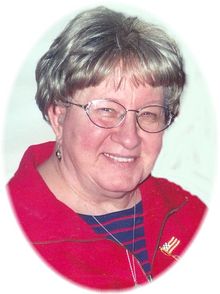 Life History for Theresa Jackson
Theresa Jackson, age 82 of Osakis, formerly of Stephen, passed away on Friday, February 22, 2013 at the Community Memorial Home in Osakis, MN.
Theresa Hattie Kuznia was born on November 7, 1930 in Stephen, MN to Benedict and Mathilda (Stalock) Kuznia. She was raised in Stephen, MN. On June 22, 1948 Theresa married Fred Capistran. In 1960 she moved to Grand Forks, MN taking a job at Eddie's Bakery. On February 5, 1964 Theresa married Bennie Jackson in Grand Forks. They moved five years later to Hopkins, MN and spent thirty years there. In 1999 they retired and moved to a home on Lake of the Woods near Warroad, MN. Because of declining health, the Jacksons resettled to the Osakis, MN area where they could be closer to family in 2005.
Theresa was a former member of the Hopkins VFW and American Legion Auxiliaries and served as past president of the Legion Auxiliary. She was an excellent cook who will be long remembered for the delicious meals she served to anyone who was lucky enough to stay for dinner. She also had a gift for knitting as well as doing various craft and sewing projects. She would knit beautiful Norwegian sweaters and gave them away as gifts. Theresa loved her family and was a doting grandma to her grandchildren. She also liked to take in a game of Bingo or two and enjoyed getting out on the dance floor. Each summer she enjoyed entertaining at the lake and working in her garden. She was a kind and gentle wife, mother, grandma and sister who will be dearly missed by her family and many friends.
Theresa is survived by her husband, Bennie Jackson of Osakis; children, Donald Capistran of Roosevelt, MN, Daryl Capistran of Minneapolis, Diane (Kenneth) DeVine of Plymouth; granddaughters, Therese Djei (Alfred), Tonella Capistran, Allison Anderson (Brett), Angela Capistran and Monica Napolitan; 4 great grandchildren, Corbin Gradine, Lily Anderson, Ethan Anderson and Caleb Napolitan; 4 brothers, Floyd (Nettie) Kuznia of Strandquist, MN, Raymond (Agnes) Kuznia of Stephen, MN, Rudy (Anita) Kuznia of Zimmerman and Clarence (Pauline) Kuznia of Aitkin, MN; a sister, Irene (Lawrence) Kiesow of Goodridge, MN; many nieces and nephews.
She is preceded in death by her parents, a son, Dale Capistran (in January of 2013) and four brothers, George, Alphonse, John and Eugene Kuznia.
Funeral services will be held for Theresa on Tuesday, February 26, 2013 at 2:00 pm at the Galeon campus in Osakis with Fr. Dave Petron officiating. Visitation will begin one hour before the service. Interment will be at the Fort Snelling National Cemetery in Minneapolis, MN. Honorary bearers are Don and Daryl Capistran, Floyd, Raymond, Rudy and Clarence Kuznia, Kenneth DeVine.
Arrangements by the Roy-Hetland Funeral Home in Osakis, MN.

To order memorial trees or send flowers to the family in memory of Theresa Jackson, please visit our flower store.