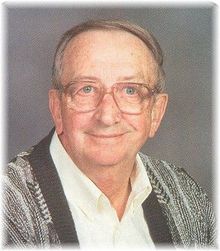 Thomas Meyers, age 76 of Parkers Prairie, MN passed away unexpectedly at his home in Parkers Prairie, MN.
Thomas Albert Meyers was born on November 16, 1935 in Parkers Prairie Township to John W. and Lilly (Ost) Meyers. He graduated from Parkers Prairie High School with the Class of 1953. He served his country during the Korean War in the U.S. Army as a specialized 3rd class (E-4) infantryman. He was honorably discharged in 1957 and upon his return went to work for the Great Northern Railroad. His next employment was with the Pillsbury Company in Minneapolis. He worked there for ten years before returning to Parkers Prairie to farm. In 1975 he returned to work for Pillsbury and during this time he assisted in securing three patents for the company. Upon his retirement in 1989, he returned home to live in Parkers Prairie.
Tom was a member of the First Presbyterian Church in Osakis.
One of his favorite things to do was attend various high school sporting events. He was a great fan who especially enjoyed the girls' basketball program. He also liked to get out on the lakes fishing. He was a kind and creative dad, grandpa and brother who will be dearly missed by his family and friends.
Tom is survived by his sons, Troy (Christine) Meyers of Blaine and Patrick (Cherie) Meyers of Seattle, WA; 4 grandchildren, Brandon Todd, Spencer, Preston and Noah Meyers; a sister, Gladys Saukerson of Minneapolis and a brother, Lewis Meyers of Cornwell, Pennsylvania. He is preceded in death by his parents, John and Lilly Meyers.
Funeral services for Tom will be held on Tuesday, April 17 at 11:00 am at the First Presbyterian Church in Osakis with Rev. Tim Sutton officiating. Organist is Ellen Bangtson. Interment is at the Parkers Prairie Cemetery in Parkers Prairie, MN with honorary pallbearers, Spencer, Preston and Noah Meyers. Active bearers are Dennis Kilimek, Brandon Todd, John Barrows, Merl Pexsa, Dennis Karger and Eugene Bremmer.

To order memorial trees or send flowers to the family in memory of Thomas Meyers, please visit our flower store.