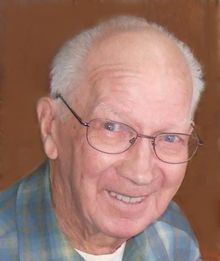 Verner Samuelson, age 95 of Sauk Centre, passed away on Wednesday, June 3 at St. Michael's Hospital in Sauk Centre. Funeral services will be held on Monday, June 8 at 11:00 am at the Long Bridge Lutheran Church in Little Sauk Township. Interment is at the church cemetery. Visitation hours are from 5 - 8 pm on Sunday evening at the Roy-Hetland Funeral Home in Osakis, Mn.
LIFE HISTORY FOR VERNER SAMUELSON
On August 21, 1919, a son was born on the family farm in Kandota Township, Todd Co., rural Sauk Centre, MN, to Olaf and Julia (Freeberg) Samuelson, who were Swedish immigrants. They named him Verner Sylvester and he was welcomed home by a brother, Genard, and a sister, Eva. Verner was raised and lived on the family dairy farm all of his life. He was a lifelong member of the Long Bridge Lutheran Church in Little Sauk, MN. Not only was he baptized and confirmed there, but he also married Margaret Rodgers there on July 11 in 1950. Verner also served as a church deacon and was chairman of the Little Sauk (Long Bridge) Lutheran Church Cemetery Board.
In 1969, Verner began working as a custodian for the 3M plant in Alexandria, MN, retiring in 1985. For 21 years, he operated a boat rental business on Long Lake, connecting to Lilly Lake and Fairy Lake, all the while raising dairy cows until he sold them in 1976. Verner was also the secretary and treasurer for the Sauk Centre Telephone Company.
Verner was a natural musician and loved to play the harmonica. He also loved to sing and dance. He especially enjoyed singing in the Gordon Mens Chorus for many years.
Although he was a very busy man, Verner made time to travel and go out fishing. He loved to scrapbook and was always collecting photos for the family albums. He raised and sold sweet corn each summer and enjoyed watching the birds at his many bird feeders, as they flew among the evergreen shelter belt that he had planted around the family farm yard.
Verner passed into his new life on Wednesday, June 3, 2015 from St. Michael's Hospital in Sauk Centre. He was a hard-working family man who will be lovingly remembered by his family and friends.
He is survived by his wife of 64 years, Margaret Samuelson of Sauk Centre; children, Elaine Seidel of Williston, ND, Vernette (Paul A.) Johnson of Sauk Rapids, Florence Helmbrecht of Sauk Centre, and Donald Samuelson of Alexandria; 7 grandchildren; 2 great grandchildren; several nieces and nephews.
Preceding him in death are his parents, brother, Genard Sorenson, and sister, Eva Horner; 3 sons-in-law, Richard Seidel, James Bielke, and William Helmbrecht.
Funeral services were held on Monday, June 8, 2015 at 11:00 am at the Long Bridge Lutheran Church in Little Sauk with Rev. Steve Hilde officiating. Musicians were organist, Ione Johnson, soloist, Leah Seidel accompanied by Sandy Weisser, and the Gordon Mens Chorus. Interment was in the church cemetery with the Gordon Mens Chorus as honorary pallbearers. Active bearers were his grandchildren and their spouses, Nicholas Samuelson, Mitchell and Tara Samuelson, Logan Samuelson, Eric and Richel Seidel, Ryan Seidel, Micah and Leah Seidel, and Naomi Johnson. Arrangements were handled by the Roy-Hetland Funeral Home, Osakis,MN.

To order memorial trees or send flowers to the family in memory of Verner Samuelson, please visit our flower store.